Obviously, like most people (LOL) I have a small 19" rack at home, in the loft. And obviously I am concerned over energy usage, so looking at what it actually uses.

I used to have an 8 port PoE switch, then two 8 port PoE switches, and then it was up to 4 of them... I have recently replaced with a single 48 port PoE switch (+2x10G) from FS. Not cheap, but ironically cheaper than the 4 switches I had before. In practice I have a dozen PoE devices, but having every port PoE capable just makes things simpler. My work linux server is in the rack too, and recently upgraded (which saved some power). It all looks pretty neat now. 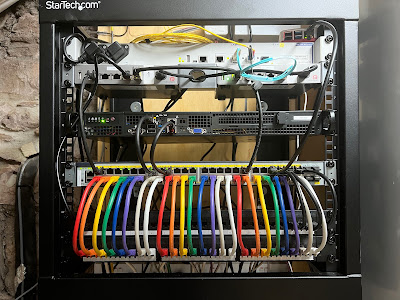 I just used a cheap in-line power meter plug from amazon. It gives me a good idea what uses what, at least in relative terms. So here is the breakdown of what it shows - for normal usage levels.

The switch is the interesting one, of course. It claims to be supplying 60W for various PoE devices, so is using only 58W itself. The PoE includes CCTV, Access Points, Small switches behind TVs, Phones, etc.

This adds up to about 220W, which does not quite match what my current clamp on the circuit is seeing, but I cannot be 100% sure my current clamps are right either. So let's assume the 220W is right.

If this was business premises, we'd be doubling those figures yet again.

Of course, in my case, a lot of electricity is from solar, and I should soon have the remaining electricity on a saner tariff (because of solar and battery).