One of the things I have not previously tried is LED strips/panels.

These are quite clever as they daisy chain one data line, allowing you to send colour data to every LED in a sequence, and hence make them all have any pattern you like. They are pretty quick too. There are a few chips out there, but Amazon have loads of strips and panels, such as a 1m/144 LED strip for £12 using WS2812B controllers.

Obviously libraries exist to make this easy to control. I use the ESP32 chips with the ESP-IDF development environment. However I am (for reasons too tedious to go in to) using CMake now instead of Make. I really do not know CMake well. So was fooled initially. Trying to include "led_strip.h" did not work.

It turned out that all I had to do was add "led_strip" to the CMakeLists.txt in COMPONENT_REQUIRES. And bingo. I am sure I tried that first, but must have got it wrong, but worked in the end.

It is then easy to use. Simple call to initialise, clear, set pixel colours, and flush out.

So what was the project? Well, I printed one of these from thingiverse. It is designed as a light. I struggled the thread the LED strip into it, and so I recommend printing 10% larger. I then wired directly to a USB powered ESP32 module, so 5V to the LED strip, and the 3.3V data line. To my surprise that works, as I was expecting to need to switch it to 5V data. Also, the LEDs can easily draw too much power causing USB to shut down, but by limiting the brightness (it was way too bright anyway) and using only 72 not 144 LEDs, I have kept it working. I just needed a bit of glue gun then. 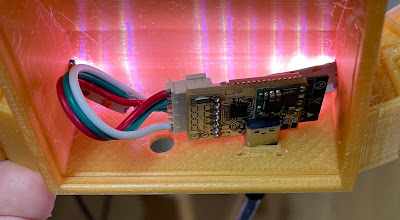 The sequence is too fast for proper dialling, obviously, and it is spinning a blue LED not actually turning the ring. It lights in the chevron positions, but not the actual chevrons. But the bright light for the kwoosh, and then sparkly/fadey for the open gate, seem to work quite well. All on github.

It talks MQTT so I made it that when the house (electric) gates open, the gate opens in the living room :-)

That said, I also have a Shelly button1 lying around that does it too.