Having made a Stargate I decided to play a little more - there are loads of "rings" of these addressable LEDs, so the obvious thing to make was a clock. I used a 24 LED ring.

My initial idea was to fade from one LED to the next during the period of the LEDs, so over a period of half an hour the hour LED fades from one to the next (being 24 LEDs on a 12 hour clock face).

This was a bad idea as it looked crap and actually made it harder to tell the time!

So, I decided a better idea was to make it a single LED. But I still did not want it to "hard tick" from one to the next, so I made it take a fixed time to fade to the next LED, in this case 1 second.

This looked a lot better and was way easier to read the time.

As you can see, it looks really neat using the LEDs "through paper". But some of this, especially the blue, is a side effect of using the iPhone. It makes the LEDs look a little better than reality. 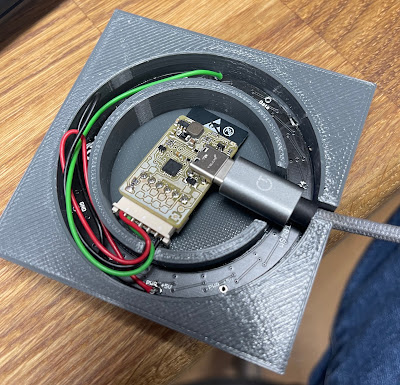