Meaning of an Amazon Christmas?

I heard that Coca Cola managed to get the red coat on Santa due to advertising in the 30s - though wikipedia suggests not quite that (here).

It seems odd in many ways quite how quickly "tradition" changes, and when you have a tradition you assume it has been the case for all time. Basically, anything that was the way it is before you were born, and even more so, before your parents were born, has always been so...

The history (assuming this video is correct) is quite crazy, in fact...

So I was pondering where it will end up in another generation or two. Even if Coca Cola did not have as much influence as it seems, I can see how a large company may want to create a change in "tradition" for its own ends.

It probably just takes a book, or more likely a book and a film and maybe a theme park, to change a tradition. So what could come next?

My guess is Amazon do something where Santa's "North Pole" operation is actually an Amazon fulfilment centre. After all, under the brown paper wrapping, almost (not quite) all of the presents I have wrapped are then in Amazon boxes (some even unopened, just wrapped up when they arrived). And some that did not arrive in Amazon boxes have then been put in spare Amazon boxes as easier to wrap. 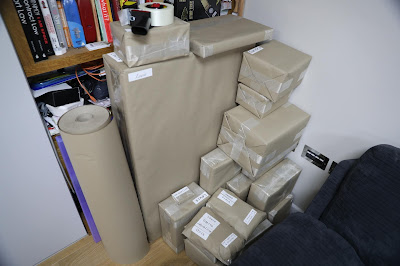 As I mentioned in an earlier post, unusually, I have ended up buying more presents this year, and a part of that is the ease of buying from Amazon. Several presents have been a result of a passing comment over coffee and I whip out my phone and quietly order the very thing my wife, or someone else, wants, even for delivery Christmas Eve!

P.S. Merry Christmas or other holiday to which you are looking forward, and have a happy Gregorian calendar new year.
Posted by RevK at 07:54:00