As you almost certainly know, there is an "account switching service" which UK banks use. I had never used it before.
TL;DR: Switching works, but it seems Barclays "mess about" for a whole day, losing details of payments and even losing credits down the cracks - yes, money just going missing!!!
Why have I not used it before? well, I have accounts with several banks, and there is really no reason to close an "old" account at any point, especially given the hassle it is to open most bank accounts (Monzo and Starling being obvious exceptions). So why would I "switch"? I can simply start using a new account for some things, simples. I appreciate that some people can't do that quite as easily.
The switching does several things - moving over your Direct Debits, and Standing Orders, transferring the old balance over, and closing the old account. Importantly any credits to the old account are forwarded to the new account.
I was interested in the mechanics of the process. I know from dealing with BACS and Direct Debits that there is a method to advise when an account has changed. As a Direct Debit originator we get told if someone changes their bank account and we are required to update the Direct Debit details. We also get told if we send money to a closed account that we used the wrong details (the money is forwarded).
I would hope there is a process for Fast Payments in the same way...
So here goes...

Setting it up (on Monzo)

Monzo make it easy - they have a button with a simple step by step guide. But there is a snag - the step by step instructions say you need last 5 digits of a debit card on the account. Hmm, the account in question did not have a debit card, so I had to order one from Barclays and wait for it to arrive. However, when I then continued with the process it DOES NOT ask for the card digits because I was moving a business account not a domestic one. I have fed back to Monzo.

I had to confirm the Barclays account, name, and address, and agree some terms, and that was it. Simple. It is then set for 8 days later.

I was curious as to the timing. Banks (traditional banks) tend to work on banking days. So I expected that it would be everything on 13th (the day before) would be normal, then everything dated 14th would be on new account, with closing balance on 13th being the amount transferred to my new account. To my surprise that was not quite the case.
Barclays were a bit odd, they said they would send printed statements, but that if I had another account and continued access to on-line banking that I would be able to see on there and that they would not send a statement. On the 13th they charged me for sending statements (not checked at office if they did). This was slightly devious as I had cleared the account to £0.00. This unexpected charge would make it overdrawn if I had not checked, and break the switch somehow.
07:09 I sent a £1 fast payment from a Lloyds account to the Barclays account. It arrived as normal, showed on the Barclays on-line banking. So I transferred out leaving £0.00 still. So the switch had not happened yet.
09:00 Monzo popped up and said switch done. So I checked Barclays, and account no longer showing. Seems the switch happens at 9am. Would have been good to know to be honest. It was lucky I had downloaded the CSV for previous day from Barclays before 9am, as I could not after 9am.
10:08 I sent another £1 fast payment. It went, and vanished!
15:34 I get a transfer to Monzo, not with the details of the fast payment I sent, but cryptically BFA ACC SWITCH GLOS reference  RESIDUAL BALANCE from account 20-33-83 88010803...
So I assume Barclays idea of when the switch was done, is not quite the same...
16:41 I send another £1, and to my surprise it is not immediately sent to Monzo. It has vanished!
Also, to my surprise, the Fast Payment process has not updated the payee details. Does it lack the simple "wrong account" logic that exists in BACS? That would be really silly, surely? I suppose, as a stretch, the BACS AWACS system is used to update, and so will happen in a day or two.
I emailed my Barclays account manager, and she said "it takes a day to switch" and that it will be all OK tomorrow... Hmm...

Still no sign of the missing £1.
A download CSV all accounts download from Barclays DOES NOT INCLUDE the old account, so I don't have the transaction on the day of transfer - that is a tad annoying!
08:52 I sent £1.15 from Lloyds to Barclays, and ka-ching, Monzo showed the payment instantly. Monzo shows correct sender sort code and account (i.e. not the Barclays one) and the correct reference. This is working nicely.
The bank details on my Lloyds account have not updated. So looks like fast payment does not have a "push back" to advise the new details. Maybe it uses BACS AWAS, in which case it will be a day or two, so I'll check.

I checked my Lloyds account, and now the details shown have magically changed to the new account. I assume this was BACS AWACS, but it works. Yay!

My account manager at Barclays says it is the same for all banks - which I doubt. Has anyone else done a bank switch and can they confirm if they have the same fiasco for transactions on the day?
I'll update if I hear any more of the missing £1. I half expected it to arrive 15:30 on 15th, but no, it had just vanished in to thin air. Scary stuff.
Update: After 2 days of nagging my account manager, they say they have found the £1 and sent it to me. However, it has not turned up, even allowing for 2 day BACS (why would they do that anyway), so still chasing. Worrying.
Update: After more chasing, 15:34, 3 days later, they fast payment me the missing £1. Finally.
Posted by RevK at 11:27:00 7 comments:

There are new rules - at almost no notice without any parliamentary oversight, as is now usual!

They have gone for a complete rewrite this time.
The Health Protection (Coronavirus, Restrictions) (No. 2) (England) Regulations 2020

Basically, gatherings up to 30 people now and more places allowed to be open subject to risk assessments and measures. All a bit wooly if you ask me.

I found it on street view. 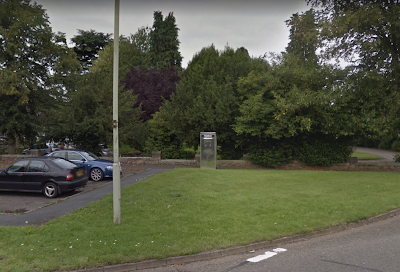 So no gatherings of two or more people in that phone box!
That, to me, suggests this was really not thought about in any detail.
Posted by RevK at 06:53:00 8 comments: