Do you want chips with that?

(for the help of Americans, "chips" mean "french fries" in the context of asking someone if they want "fries with that", but also mean "microchips" in context of electronics, sorry to have to explain that)

For a lot of my little PCB designs I need a voltage regulator, something to provide a clean 3.3V DC power for things like an ESP32, which means over 0.5A peaks for WiFi. In this case I have a nice PCB footprint using an LMR16006 which is 600mA at 3.3V, and has proved very reliable and easy to use. 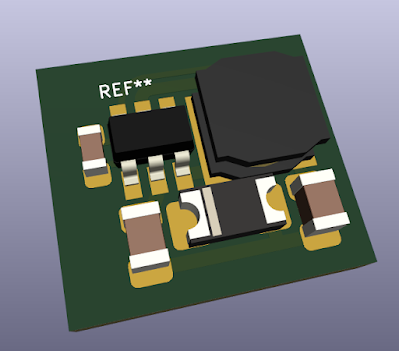 There are many reasons for picking this, even though a slightly pricey solution. For a start it is a leaded chip so can be hand soldered. To be honest I am doing things using solder paste and a stencil much more now, so far less critical. But it is small - the whole footprint for the regulator is small.

Some time ago I got 100 off of the parts and put in a draw and have used on various boards, but I am running out. It is only a few pounds for the parts. What none of us knew is chips would become somewhat hard to get all of a sudden. Had I had any clue I'd have got several hundred and even kept them on tapes so could be used for production. Hindsight.

So now I am stuck. I have limited supplies and nobody has stock until late 2023 now. So I need to find an alternative. Something small and easy to use. Something available that won't run out! Something offering at least 600mA of 3.3V. Something with a nice wide input voltage range. Something easy to hand solder, or at least easy to solder paste and cook by hand. Also, as some boards are battery based, we want very low idle current, which this manages quite well and automatically.

I saw a LTC7103 suggested by someone - way overkill, but very cool. Also rather pricey. I looked a little while ago, and thought that it was good that you can still get them. Today I thought I would try this out, and get some, and make some boards, only to find Mouser have 7 of them, and a silly price, and no more until August at the soonest.

So I need to find something else. I am not an electronics engineer, honest. I know that whatever I get means new PCB layouts for various boards. I am starting to get a feel of how much hassle this all is right now. Oh! to be back in the "normal" days of next day whatever chips you want from a range of suppliers.

I expect I'll pick another solution some time soon, and make some boards, and maybe even hoard a few hundred of whatever I pick!

Of course the same is happening to the new FB9000 FireBricks, which are also waiting on chips. All fun and games.

Sadly it has become clear that the system installed is simply not going to work. So we are having it taken out, but keeping the Lossnay for fresh air.

Why on earth Mitsubishi would have a system supplied with dedicated controllers that have a thermistor in them, and a setting to use the controller temperature, but not actually support that, is beyond me. It does not even give an error, it shows a plausible, but wrong, temperature. But apparently they cannot support controlling from the controller, and so the two rooms off each system approach is just not going to work.

So now I have to start again with another air-con company. Maybe we'll get something before the summer.

All good fun. But they have sent interesting pictures of previous installations, which look cool. 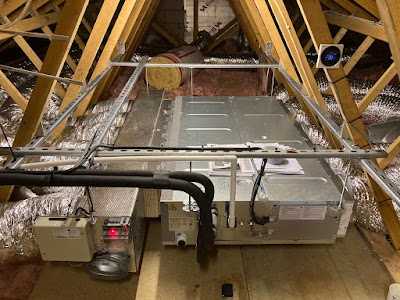 I am using KiCad for PCB design, and it is pretty impressive, but KiCad version 6 has just been released.

There are lots of small changes, but all good. So I checked all my designs. Some tweaks were needed.

One of the nice things is I decided to look in to was making curvy tracks - mainly for the RF board I have - the PN532 NFC/RFID reader. RF is still voodoo, so no idea just yet if this is going to be an improvement or not. Hopefully the changed boards work just as well, if not better.

PCBs are like works of art, and a bit like coding, they can be tinkered with and fine tuned over and over again. KiCad caused me to start this again.

One issue was my antenna design - a simple loop. Previously I could fudge a "line" in copper on a footprint, and as long as the line did not cross the centre point of a pad it was not spotted by the DRC. The new KiCad does spot this, and so spots the antenna is a loop that shorts things. Well, antennas do that! I have yet to work out a way to tell it that this is a special case. So I worked around it.

What I did was make the 0603 links to the antenna part of its footprint. This means the loop can be a pad design with no pin name/number, and the other end 0603 pads (usually a 0R link) are the connection to the antenna footprint. That way it can pass DRC.

But the tinkering continued...

We know these boards work well, and all of these tweaks should do no harm, and may even improve it.

Well, I have the reverse mount LEDs coming Thursday, so I can work out the right resistors as they are higher current - also making sure the PN532 can drive them OK. I will then get some PCBs made to test all these changes - probably an express order PCBTrain to arrive Friday.

Once I have the PCBs I'll know if the new layout works as well as before, and if the LEDs work properly and so on. The 3D case design does not even need to change!

This leave the real next step - I have a BOM that loads OK on PCBTrain quoting tool, and gives pricing. I need to talk to them as it seems more for components that direct from Mouser, but I am sure that can be sorted. As with most components there is a shit lead time, especially for the PN532 chip. It does look like it will be not as cheap as I would like, around £30 a board assembled on small ish quantities (100), maybe £20 for 1000 off. So I am interested in if people want this. My plan for now is make some and sell at cost on Amazon.

They are a cool device for any hobby project and unlike some of the other PN532 boards they are designed to be used for access control, with tamper switch button and traffic light LEDs built in, and a small 40x40 size. Also, unlike a lot of others, they have BAV99 diodes to provide more ESD protection of the pins and LEDs. 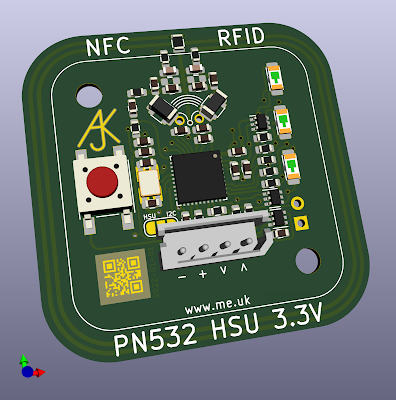 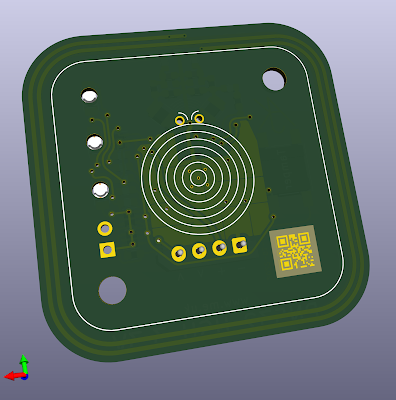 Update: Parts came Wednesday - the new reverse mount LEDs work nicely, as does replacement crystal (as one we were using is not in stock). So new board design has been ordered to test the RF side, expected Friday.