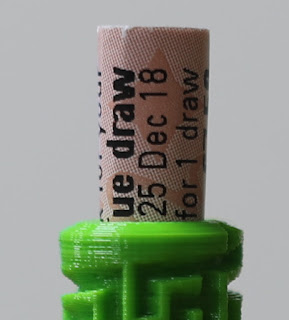 Etiquette is complicated. It is a set of rules for social behaviour. There are, of course, many books on this, but at the end of the day etiquette only works if those involved are working to the same rules, and for that reason I am not going to read/reference any formal etiquette in this post, but rely on those rules I have learned :-)

When they work, the rules of etiquette help avoid awkward situations and ensure social interactions run smoothly. They are not usually logical though, which is a nuisance. If there were logical, one could work out the rules (or close enough) for any new situation. Unfortunately they have to be learned, sometimes the hard way by getting them wrong.

So, I was pondering the rules on gifts...

Of course, there are different rules for gifts to children, so I am mainly talking here about adults giving gifts, e.g. Christmas and birthday, and so on.

There are, of course, many different, and sometimes overlapping, social groups. These will often develop their own set of traditions and etiquette for giving gifts. Sometimes these are more formal, such as a "secret Santa" arrangement in an office at Christmas - with explicit rules on value of gift.

There are, of course, "token" gifts (often the case for secret Santa). These are usually low value, sometimes humours, and sometimes useful.

But sometimes, between adults, there may be gifts of more value given. These are more complex. I have already commented how Christmas seems to be a time of several months where one dare not buy anything you actually want in case someone gets it for you for Christmas. There is also the risk of duplicate gifts. It is not usually etiquette to simple state exactly what you expect as a gift as that is obliging someone to get it for you. Of course you are expected to appreciate the gift, not discard it. This creates a problem as not saying exactly what you do want people are expected to get exactly the right thing, and not some lesser model with which you will be unhappy. Subtle clues are then involved, and I don't do subtle well!

There is also a usual expectation of some reciprocality of gift value. Sheldon from The Big Bang Theory takes this to extreme, working out the cost of gifts to the cent so as to avoid leaving any lingering imbalance and obligation (and I know how he feels). Of course this then creates a problem if a gift is "too much". If I was to gift a friend something worth thousands of pounds, they would feel obliged to do the same, and may not have the means to do so.

So, no, I don't really have many answers. I would say if buying a gift of value, i.e. not some token gift, then really try and work out exactly what they want rather than getting something "close". Dilbert has comments on gift vouchers - basically why swap currency you can spend anywhere with currency that only works in one place and for a limited time. Well, they can be useful I suppose as a way to help someone get just the thing they want without getting it wrong - if you know someone wants a new apple watch, an apple gift voucher maybe better than getting the wrong version/size/etc.

There is, however, one rather complex type of gift:-

On the face of it a lottery ticket makes a perfect "token" gift. It is low value, e.g. £2, and nobody is going to say "oh, shame, I already have a lottery ticket". It is a "fun" gift in a way.

There are, of course, two big issues with giving a lottery ticket:

The most likely case, as with over 90% of all lottery lines, is that it is worthless. You have literally given someone a worthless scrap of paper. That struggles to even be worthy of a "token" gift.

There is sort of one way around this, and this is what led to my making this post - an event with quite a few people where it is customarily to give the attendees a token gift. Giving all a lottery ticket, especially with a couple of "lines" means that there is likely to be someone that at least wins £30. This means all can sort of participate in the gift receipt process vicariously to some extent. It is not hard to have enough tickets to be pretty sure someone will win £30.

Winning £30 is pretty much the ideal outcome of giving a lottery ticket - it is fun and not a crazy amount for a token gift. Indeed, one could be devious even in the case of giving a couple of people a gift (e.g. at Christmas) by using something like my lottery ticket mazes to give tickets that supposedly were put in the maze before the draw - if you actually buy many tickets, and pick the ones that did win £30 to include, at the last minute, perhaps swapping with the maze boxes previously on display before the draw, you could make it that everyone is a winner. Not sure how well that would work, but it would be fund if everyone in a small group all won on their lottery tickets.

The bigger issue is the etiquette around the gift recipient winning a lot more. This is where there may not be clear etiquette in place, and it could cause hard feeling. What if the ticket wins £1,750 or £1,000,000? Is the recipient expected to share that with the giver?

Again, logic suggests the gift was worth £2 and the winnings are entirely the recipients, but will that leave bad feeling. What if the ticket is a £10million jackpot? The way that is handled could destroy a family. Thankfully it is very unlikely, but even winning £140 could cause some hard feeling in some social groups.

I do have a suggestion in this case, but it doubles the cost. If the giver gets for themselves the exact same lottery lines, then anything won by the recipients is also won by the giver - no feeling of any obligation to share with the giver as they are already a winner to the same extent. I think that will work.
at January 15, 2019