An interesting scam (I wonder how Amex will cope).

I am no expert on scams, honest, but I thought this was interesting.

I saw an advert (on Facebook) for a handheld inkjet printer. This looks cool, and I have previously seen some article on them. I vaguely recalled that they cost several hundred pounds, and the advert was for $44, which seemed very cheap. To be fair, many printers you can buy are stupidly cheap as they sting you on the consumables - so very possible. This is what the printer looks like: https://youtu.be/Va3A7QcBlLE

I decided to order one. My reasoning was that :-

So how did I fair?

Well, it was a scam - what a surprise! Shame, as it would have been cool.

Basically, I got an email confirmation of my order, but it said it would ship in a few weeks. The first step in causing delay.

After nothing arrived, I put in a dispute with Amex.

Out of the blue (and perhaps because of dispute) the scammer sent an email saying it had been shipped! I did not hold out much hope, and I assume another delaying tactic.

The advert on Facebook popped up several more times, with different company names, and I complained to Facebook. They would not take action even though clearly a scam - the comments made it clear too. Also, it seems, these printers are normally around $8000 or something crazy so obviously a scam, had I bothered to check.

A while later, something arrived in the post... Signed-for, from China:- 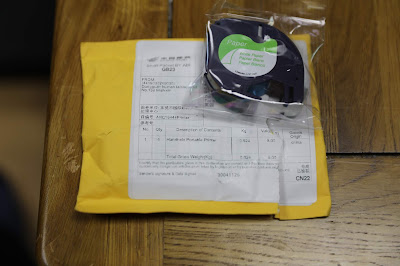 They have the right description, but what they sent was a paper tape for a dymo labeller! As it happens, I had just got a Dymo labeller for my grandson, so it did not go to waste.

The "dispute" on Amex showed as complete, and no credit, and no contact from Amex. I did wonder if it had gone in spam and been deleted (spam not held for long). Seems not, as emails now from Amex are not going in to spam.

I raised a dispute again, and now even that has vanished, not showing a dispute complete or anything. Both were via the Amex app, which seemed to make raising the dispute quite easy!

I ended up doing a chat on their web site - apparently the dispute was stuck somehow, which is odd. He cleared it and made a new one and gave me a link to upload documents (e.g. above image). It would not take a jpeg but would take a PDF with a jpeg embedded! Crazy!

One issue is they wanted details of what the merchant had advertised. They were sneaky as the original advert was a video on Facebook and not there any more, and I did not even have a screenshot. Later Facebook adverts were different company name, so I could not use that. The confirmation email just had the description "Handheld Portable Printer" and even the "view my order" link (which no longer works) only had that description and not more detail nor an image.

So the evidence to Amex that I can provide is somewhat limited. Indeed, only the description on the label is in my favour. I wonder if they will claim that there is something lost in translation and a paper tape is all they were trying to sell? Oddly, such a tape is not even worth $44.