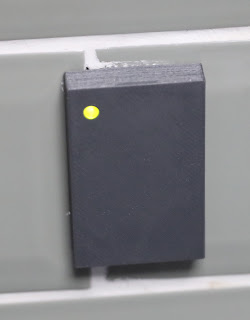 I have been playing with a door entry system, as you will have seen, and there are several steps like choosing processor, and voltage regulators, and relays, and so on. All good fun, but it gets a bit more interesting when you actually want to create some security.

But first, a couple of updates.

The Elechouse PN532 V4 cards really just work, they are excellent, talk to bank cards and MIFARE cards and fobs at a usable distance with no problem. Really impressed. I cannot stress this enough, buy these from Elechouse directly in China - they can ship in a few days - they work. But one extra bit, as I am using these on the "outside" part of the door system - I wanted an LED. It seems the PN532 has some GPIO pins, so a simple bi-colour LED and resistor directly on two of the pins (which the elechouse bring out to pad/holes) gives me a nice red/green LED (with various combinations of blinking as I like). On top of that the WiFi has been really reliable, but it seems that can improve when the next ESP8266 libraries are released soon. I have been using on one of my doors at home for a couple of weeks now, and it is working well. 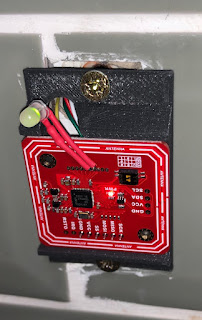 Even though the WiFi is working well, it remains an area of concern in terms of reliability and fallback for power failure, and vulnerability. The system is using TLS everywhere, so makes it pretty secure against infiltration, but not against disruptive attacks - a weakness of any RF based systems.

The simplest fallback is a system where one, or more, cards are configured in door(s) to be allowed to open the door off-line when no WiFi. Overall this is a good safety net, and the one or two cards with such an ID can be kept safe. As they would be my cards, and there is no door of which I should be locked out, this does not make this a work around of security. Even so, it is a bodge.

A better solution may be to allow off-line working of the doors. This is possible, of course. In fact, cards like the NXP MIFARE DESFire EV1 cards are ideal for this. Ideally you want a system that is at least mostly on-line allowing off-line but with logging, and controls - which suites WiFi well.

How would off-line work?

The trick with off-line is you need to somehow encode the rules for access in a way that does not need live access to a control system. This is complicated - it could be a large database, and what if you have a lot of people - do you literally have to sync a whole user access database in to every small door controller CPU/Flash? That would work, but is not that scaleable.

So code details in the card. Well, that is tricky if the card can be changed. Of course you want secure cards, and the DESFire cards allow this. They allow for a card you cannot copy or change, but allow lots of fields and "files" on the card which could encode details of times of day and day of week and expiry dates and which doors are allowed or barred.

Using details on a card, which can only be changed using a key, means that an off-line system can work with unlimited numbers of users - checking the credentials from the card for each door access, and ensuring very quick response and instant operation without waiting on an on-line system.

From a reliability point of view this is excellent. As long as the door has power (which is easy with 12V and battery boxes) it works! Of course you need a way to blacklist cards from a central control, but this is for exceptions only, and short expiry on cards can keep this to a minimum.

Of course you can make things a tad more secure by having some things on-line. E.g. if a card has not been used for a few days - this allows for cards to need extra checking if someone has been on holiday, etc. You could also make some doors on-line for most users (except for me!) for added security. You could make doors on-line when "locked", i.e. alarm set, so first use of the day could have a lag if WiFi is iffy. All of these are good compromises for ensuring most, or all, doors are fast response and very reliable all day which few exceptions. Users get upset walking in to a door that did not open when expected - you really only have a few hundred ms to play with here :-)

Of course one trick is "normally on-line" only falling back to off-line working (where allowed) if response takes more than X milliseconds.

It is not as simple as one would like. Making all of this work at a technical level, making PCBs, making readers, and 3D printed cases, and firmware - all pretty straight forward. Even the low level comms to the DESFire cards is not that hard (with help from datasheets and some internet blogs).

However, the bigger issue is how you manage the cards.

The DESFire cards do not use public/private key logic, which is a shame. If they did, all readers could have public keys with no concern on these leaking, whilst the cards have embedded secret keys used to answer a challenge from the reader. Unfortunately the DESFire authentication is mutual / symmetric, so the same key is needed in the card and the reader.


The validation is perhaps the most annoying - as you want to avoid a complete database of all cards in every lock with the key for that card. Indeed, that means more keys in more places that could be compromised (physically steal a door control board and re-flash to dump keys). It does not help over having a common key.

So in practice, for each application, you need an authentication key that is stored in the locks if they are to work off line at all. You could have different doors/locks on different applications where there are different levels of security or sensitivity in an organisation. That helps.

That also means communicating the key to the locks (let's use TLS shall we). Does it mean storing in the lock? We could put in flash, or maybe we deliberately store only in RAM and need to be on-line once after any reboot before we can work off line. Remember, if someone gets a key, they can make cards, so no level of fallback key is any good if it could be compromised.

And then the whole access control rights are more complex - not just which doors and what times, but also who has controls to change access on people's cards. The NP532 has a nice feature where you can talk to two cards in RF field at once, so you can make it that programming any card means applying that target card and the card of the HR person that has authority to make changes at the same time on a reader on a desk. Not sure if that is more than a gimmick though. Even so, you can use the cards as part of login processes for management of cards, and should do as at least two factor auth.

A lot of the work on this project will be the management system for cards, and logging, and security (and GDPR).

You also need to consider compromises - what if someone did steal a reader off a door - can you re-issue TLS/MQTT credentials to all readers? Can you update keys? How does that process work. The simple case of a lost card is easy by comparison (blacklist on all readers for X days). Do you roll over keys anyway and have a system to update on next use? All good fun.

There is a way to be on-line and not WiFi - I could install an RS485 driver and have the reader look like a normal Max reader to a Galaxy alarm system - doing the off-line control (all set up over wifi) and reporting a simple "key fob" number to the alarm / door system if all OK. Viable and quick.

Is there a product in this?

It would be easy to make a product - an external reader based on PN532 with LEDs, perhaps a beeper, and an internal unit with contact inputs, solid state really output, RS485 for talking to Galaxy panel, WiFi, 12V power, and even a programming header for hobbyist market.

It would be massively more secure than Max readers, as using proper DESFire cards and keys, and the external unit not housing the relay even. Isolate its power and control lines and you cannot "break" the door control from outside. Nice.

It would cost (mainly in the CE marking, safety and EMC testing). It could be neat, and a drop in high security system for an existing RS485 based door/alarm system, or a WiFi based system. Whilst we spend a lot on R&D, this would be perhaps a tad too speculative for now. Of course if you are a large company with many offices and staff and interested in a serious bespoke entry control system - let me know - we have the technology now.

For now, I expect this is for my home, and maybe office later, not a product. But still, a big step forward in terms of security.


All of this, including manuals, PCB layouts, pictures, and code, are being kept up on GitHub... All part of A&A giving back to open source.
at May 24, 2019