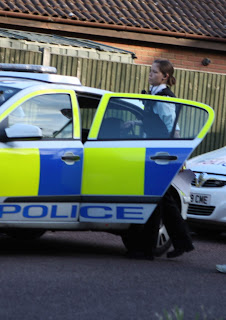 Worrying times indeed - that police have reportedly stopped NHS staff (here) and would not accept their NHS ID card as good enough evidence for "essential travel".

There are people saying that it should be good enough to show "essential travel", and others saying that it is crazy the police don't think NHS staff are doing "essential work" or are "key workers". I agree that it is wrong, but these comments show people don't understand the rules at all (and clearly, neither do the police). There is no need to prove you are on "essential travel" as there is no law against "travel". Similarly there is no law saying only "essential work" can be done, or only "key workers" can work.

But first, again, please stay at home if you can - be sensible.

So let's look at the logic here a bit. There are a couple of key rules - one on public gatherings (not relevant) and one on leaving the place where you live.

Update: The college of police have released more guidance (here).

Update: as of 11am on 22nd April the law changed to cover "being outside" not just "leaving". Here.

The first problem is that the police (see this report) have no "stop and account" power anyway.

"The helpful National Police Chief’s Council and College of Policing Guidance makes clear that there is no power to “stop and account”. Therefore, the police should not be intercepting people who they do not suspect to be causing health risks by their behaviour in violation of Regulation 6 or 7."

They also say road checks on every vehicle are disproportionate.

So why were they stopping someone anyway? Note the "causing health risks" part - this is public health law, not public order law, so they don't just have to suspect you left where you live without reasonable excuse, they have to think you are causing a public health risk by doing so. It is hard to see how anyone in a car driving on a road is "causing a health risk" at all. Yes, they could be doing something stupid, and there are laws on public gatherings, but just driving in a card, especially if alone, clear is not in itself a public health risk.

Obviously, the police should also not, themselves, be causing a health risk - yet stopping and questioning people does just that as they become "plague spreaders" as they are in contact with so many people, and are doing it deliberately! Stopping NHS staff is even worse as they too are high risk not just of having the virus (spreading to police) but also of spreading it to those vulnerable (in hospital).

Where are you going?

We don't know what was actually asked when they stopped this NHS worker. I would not be surprised if they asked where someone is going - accounts from friends who have been stopped suggest this is the case. I have heard reports of someone stopped when going to tend to their horse and having to make an hour long round trip back home to get proof that they have a horse and where it is stabled, and so on. This is crazy!

Actually the only relevant question to ask is "For what reason did you leave where you live?"

But even that is a bit of a useless question. Nothing you are doing now has to relate to why you left where you live. Whilst you don't even have to say why, you can say any of the reasons listed (here) and there is really no way a police officer, or anyone else, can really prove beyond reasonable doubt whether that was or was not your "reason" when you actually left where you live. It is hard to even justify simply suspecting someone of leaving for some other reason as they can leave for one reason and be doing something else now - so current actions do not have to relate to the "reason". Yes, the law is a tad daft if so unenforceable - but most people try follow the law which makes it a useful law even so.

Where do you work?

One presumes the NHS staff member said they were going to work, i.e. they left where they live as they need to travel for work for the NHS. So what is the next question, perhaps "where do you work?".

Actually the only relevant question to ask is "Could you do that work at home?"

But even that is a bit of a useless question. If you say "no", the police officer cannot prove beyond reasonable doubt that is not the case, can he/she? Even if your work is done solely on a computer that does not mean you have a computer, or your computer is or can be set up to allow that work. Even if set up to work from home, if your Internet link breaks or computer breaks or any other reason, you may not be currently able to do that work from home.

Thankfully, with a lot of work from our ops team, my work has set up so that all but one person is working from home, and doing a great job, but that is not the case for many companies, and almost impossible to prove that someone can work from home.

Some people have suggested it is crazy that the police did not consider NHS work essential, but again, there is no question of what the work is - everyone is allowed to work, and allowed to leave where they live if they need to travel for work if they cannot do it from home.

A gardener, or florist, or bricklayer, can all work and can leave where they live to travel for work if they cannot do that work at home. What ID would police expect to see for such workers to somehow justify their "essential travel"?

Even the news article talks of proving it was essential travel, and that NHS ID was not good enough to prove that. But again travel is not limited to "essential travel". It is not even limited to "travel for work" - just that one of the reasonable excuses for leaving home is that you need to travel for work. There are many other reasons to leave home that could involve travelling including to go some where to exercise, or to go shopping. But these are not actually the only reasons allowed for "travel" as travel itself is not in any way restricted or banned! Essential travel is not a "thing".

There is a big issue, in my view, with people somehow expected to prove their innocence, and even be able to do that on the spot or face a fine - or be turned back, or escorted home.

Why does it matter?

But once again, please stay home and only go out if you really need - and wash you hands!
Posted by RevK at 12:15:00