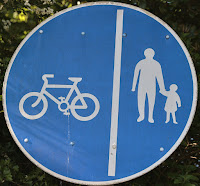 There are number of separated cycle path / footpaths on the estate where I live, and I use these a lot, both walking and cycling. As a cyclist I always notice the people walking on the wrong side :-)

I am not sure there is.

The next one is not so obvious. On one end, one side goes on to the footpath straight on, and the other at right angles. However, on the other end (2nd picture) one side has no footpath, so makes sense to be the cycle lane, as shown. Not that daft.

The next one is much more obvious. As you see on the approach (1st picture) the foot path continues in to the cycle path and serves several houses, so pretty much has to be the footpath side. The other end is just on to the road, so no preference. Good choice.