The new rules (Wales, June 2020) - a little different to England

The new rules (here) come in two force 1st June, and are similar to those in England, but not quite the same. These are the main changes that I can see.

Section 8 covering leaving home is replaced. This now covers leaving or staying outside your local area, and being indoors with someone not of same household or carer. This is different to England which simply covers sleep-overs. There are a similar (non exhaustive) list of reasonable excuses as before. There is also an 8A which, unlike England, requires you to work from home if you can.

There is a similar restriction on gatherings, but unlike England allowing up to 6 outside from any household, 8B restricts to two households maximum in Wales.

What does this mean:

I am unsure how this works if someone in England leaves their local area and goes to Wales. The Welsh rules cover being away from your local area, so that is probably not allowed. 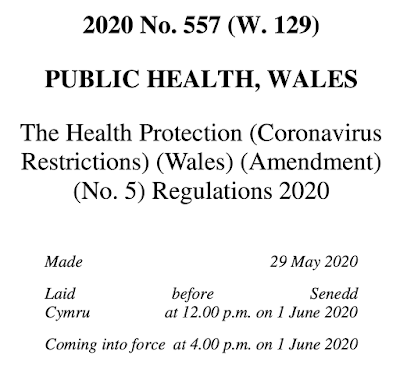