There is now law requiring (from 24th Sep) a QR code to be displayed in various premises so people can scan it in to the NHS COVID-19 App. See The Health Protection (Coronavirus, Collection of Contact Details etc and Related Requirements) Regulations 2020. The law has plenty of issues, but let's look at those QR codes...

It seems you can request the QR code poster for your venue, see here. The poster is emailed to you.

This is an example. 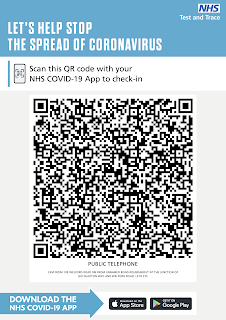 This is not how you do it - and I wonder if they got any technical advice from anyone on the matter first.

What's in this huge QR code?

The data contained is an RFC7515 JSON Web Signature (JWS) base64 coded string which contains:- 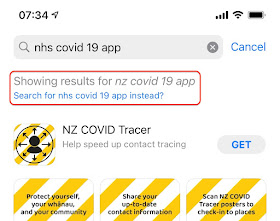 In summary this is thrown together with some standard libraries and very little actual thought - is not even a valid QR code, and is going to be a mess with every waiter now expected to provide tech support on app installation on Android and iPhone to every customer that comes along - but this is very much what we have come to expect.

How to make it more user friendly

Many people have QR readers built in to their phone, for example an iPhone will pop up with a link from the camera app itself, so there is a really simple trick for this - make the QR code a URL which the app can read as data, but if used simply as a URL itself you end up going to a web site which redirects you to the app or the app store to download the app. The data can be after a # in the URL so not even sent to the server when used as a URL. This allows it to be used from the app or from the camera, and helps for people that don't yet have the app, and those that mistakenly did not realise they have to launch the app first. It makes it a lot simpler to use.

It is not hard, basically, instead of UKC19TRACING:1:blah use https://c19qr.uk/#blah
(well, obviously, an nhs.uk domain would be used)

(Update: Just to clarify, the use of a URL at the start is not to make the QR code usage rely on an internet connection or a web site in any way. If the app is installed it would be used purely as a version/ID confirmation, like the UKC19TRACING:1: string, and the app would then just use the data in the QR code, not visit a web site. The URL is there to make it easy for people to use from camera, and to install the app in the first place). 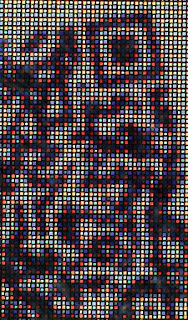 I have added this to clarify a little why the large / dense QR code is not ideal.

For a start, from a purely technical point of view, it is just unnecessary. You need some extra data to avoid confusion with other uses of QR codes, which is what the UKC19TRACING: is for, and ideally a version, which is what the 1: is for. Beyond that you just need the actual data (location code, postcode, and venue name, in this case). There is no need for extra syntax (e.g. JSON). Indeed, some careful choice of data (e.g. using digits, or upper case letters and digits) can make the QR coding even more efficient. But this is far from the only reason.

In ideal conditions it does not matter if you have a large/dense QR code. As someone that has been messing with barcodes for around 40 years, I have no trouble using a camera phone to read a barcode. I know what hoops the phone / software is going through to make it work and how best to position the camera. But I cringe watching people do this and struggle (notably, someone I know reading lottery ticket QR codes). They (understandably) don't know how these things work and will randomly try getting closer or further away, usually the wrong way, not waiting for camera to focus, etc, eventually reading the code.

The way it works is the camera has to be able to see the units, i.e. the black and white squares that make up the code. The camera itself has pixels (dots) with which it can see. If the camera was perfectly aligned and square you could read a QR code with one such pixel per unit, but that never happens, and in practice you need a lot more. Throw in the possibility of poor focus, glare and reflection from glass / perspex, dirty lens, and the QR code at an angle, and you need even more. Thankfully most modern camera phones are high resolution enough to cope and read a very large and dense QR code. Not all phone cameras are made equal and some are much lower resolution and slower to focus. Print quality also matters, and whilst most printers are very good, remember this is also intended to be used displayed on a screen. The QR code itself includes error correction which allows some imperfections and errors to be corrected, but this can only help so much.

Even so, perhaps the biggest issue with a large and dense QR code is the range of distance between the code and the camera. This is a thing I observe people struggling with, for some reason. With a low density QR code the camera can read it when it is small in the view of the camera. Also, when it is small in the view, they do not have to point directly at it, it can be off to one side, etc. With a large / dense QR code the camera needs to be closer, with the QR code filling more of the frame. So the usable distance range where the code can be read relates directly to how dense the QR code is. The more usable range, the easier it is for the user to get it right first time and not hold up a queue of people trying to get in to a bar.

Of course the other issue is how big you print it. The guideline for this is to print at least A4. Why? Because it is so dense. A smaller code could be printed much smaller and still be easy to use. I note, for example, Costa have small table menu cards with the check-in QR codes they used (which are nice and small) on them, and they are much smaller than A4.

One final reason is confusion and paranoia. I already see people on twitter asking what the hell is in this huge QR code. People are concerned that it obviously contains a lot of data and it is not obvious why. The whole project has suffered from privacy concerns already, and this does not help.

Why is signing daft?

Signing means that there is an extra chunk of information in the QR code (making it a lot bigger/denser) that ensures the data is genuine, i.e. that it definitely came from the government QR code generator web page. There are many good reasons to sign things, but not in this case.

The signing a tad daft as :-

Whilst this is not quite the way the track and trace process works, if some establishment did not want to risk being shut down, they could put the barcode for a competitor, maybe with a vague establishment name in the QR code, so not obvious when using the app. The gov website lets you make a signed QR code for anywhere, and even if they did not, you can literally copy a signed QR code you can see anywhere, and it is still signed.

And yes, they will sign almost anything. Emojis seem to be banned, but hieroglyphs are not. So I seem to have got the UK Government to digitally sign a penis!

How it could be a lot less dense, so easier to read

As an example, if I just include the actual data, and some sort of signature (an MD5 in this case, there are many ways to sign things), and a URL prefix to get the app (which acts as ID/version), you could make a code like this... Way less dense, and easier to use. 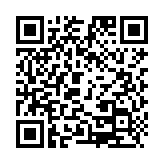 If you don't sign the data (and why would you?)

All that is really needed in the code is the location, a postcode with DPS, e.g. LE183TE9Z, or maybe just a UPRN (Unique Property Reference Number), e.g. 100032050996. The postcode/DPS may be better as you can then quote the venue postcode in the app. You probably do need the venue name as well to quote in the app. That is not a lot of data that is actually needed.

If you do that, you can make a code like this which has a URL, UPRN, and premises name in it, and is way less dense and easier to scan.

With just a postcode/DPS it is possible to go even smaller!

Is the app OK though?

Just to be clear, this is criticism of the QR code not the track and trace app. There is a blog on that which is quite interesting, but does not explain why they felt it necessary to sign the QR codes, or why they did not make them a URL format for easy access to the app. Here: https://www.ncsc.gov.uk/blog-post/nhs-test-and-trace-app-security-redux (the previous app described here https://www.ncsc.gov.uk/blog-post/security-behind-nhs-contact-tracing-app)

P.S. I have a QR code generation library available free on GitHub. here.