I am thinking of the next generation of my SolarSystem alarm system.

It started as RS485, a slot in replacement for a Galaxy system using the same external devices, and running on a Raspberry Pi with USB RS485 adaptors. It worked quite well.

The next generation used ESP8266, then ESP32 based WiFi connected devices. This works well.

I am now planning to get rid of the Raspberry Pi and RS485 completely. The idea is the ESP32 modules work together over a mesh WiFi. Yes, one of them would connect to a conventional WiFi access point, but they can work without that - off 12V battery backup if needed, with no "controller" as such.

This is not that complex - devices need to know what inputs and outputs link to what areas and states in the system, and broadcast information to allow every unit to know when alarm armed, or triggered, etc. Using secure AES encrypted DESFire key fobs on door controllers the alarm can be set and unset.

There would still be a "controller" to configure the system, program fobs, record logs, and so on. But this could be a cloud based service. Some of you know my love of cloud based services (not), and as this is all open source it would allow the cloud service to be run locally. But the server is not a "live" part of the system - it allows config, and so on - via a simple web page. Obviously communications would then be secure to the server.

This makes everything simpler to set up as you just need a local WiFI internet access. 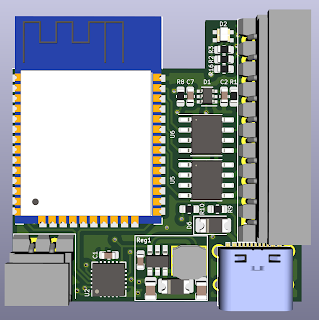 To make it work I now have designs (and several prototype boards and cases) for key components:

The nice thing is that just one of these, eg door control, can be set up to talk to local WiFi/NAT and connect to a cloud service allowing configuration of an access system. But you can then add other modules, and set up a whole alarm system if you want. The key fobs have access controls such as which doors, and times of day and days of week that are allowed.

The issue is that I need to do quite a lot to complete the design and coding for this - not just in the modules, but the controller system and database back end. This is all pure R&D work at present with no concrete customers for the system (though we have had some interest), which can make it a bit hard getting the motivation - but a real customer would also help ensure we are steering the project in the right direction.

One of the design challenges is bootstrapping the security of key fobs and controllers. They need AES keys, and these need to be secure, and need to get in to devices and fobs.

In simple practical terms, you can just buy fobs from the likes of Amazon, and then use one one of the NFC modules - e.g. one of the doors - to program the fob. Similarly you can make ESP32 modules, or use off the shelf modules like nodemcu and flash the code.

But you have to be very sure that this is actually being done by someone authorised to program fobs. Even then, if someone wanted to, they could capture that initial config and get the AES key used. Once the AES key is know the system for a whole site can be compromised.

Once the fob is programmed, any capture of the communications does not help you, but the initial set up of a fob is inherently insecure - this is the bootstrap problem - it has to be insecure as the fob is blank and it has to get the keys - so someone can "pretend to be a blank fob" and get the keys in the same way.

You have the same issue with end devices and a cloud system - you have to be sure the device is the device you think it is. If someone can get a fake device on a system it can get keys. So the devices need a secure client identity too.

Of course any system has to consider security - the AES/DESFire fobs are massively more secure than 125kHz fobs used by Galaxy Max readers. The WiFi is a bit of a trade off: It is way more secure using WIFi and TLS than RS485 (Galaxy modules can have messages inserted on the bus without it noticing!). It is possible to disrupt (just as cutting an RS485 bus is, which is exposed on outside of building if using Max readers), but like RS485 it would trigger an alarm. At the end of the day you have to be more secure than breaking a window.