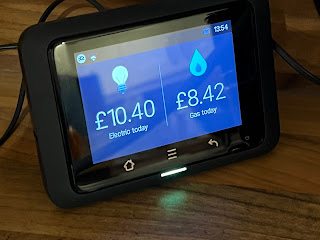 I really am at a loss as to quite how bad energy companies seem to be.

They basically have one job - charge for the gas and electricity you use. With smart meters it is really easy as they have access to the data from the meter. Without, they need meter readings, from customers or by sending someone round.

But the basic business processes seem blindingly simple. They are selling two things, gas an electricity, And there is a meter that tracks the actual usage. The bills should be simple.

OK I know there is other admin, getting meters changed, credit control, etc, but the basic billing is noddy.

Some are being a tad cleverer, like Octopus. The first time I was with them, in my previous house, was when smart meters were dumb if you changed provider, so was a bit of a mess, but this time they have the data - half hour readings, usually within a day of real time, and visible to me. They also seem to be very responsive at sorting any questions or issues. This does allow them to be a bit more innovative with tariffs. When I was a kid we had economy seven, with a timer on the meter to switch metering between the two settings. We had a storage heater on the cheap night-time electricity. These days they can do a rate per half hour even, and there is export now as well. But even so, it is really not rocket science.

So how the hell is it that some of them seem to be so incredibly bad at it? Pretty much every company I have been with (perhaps with exception of Octopus this time) has screwed up in one way or another.

Now, don't get me wrong, I know there can be screw ups, but at the end of the day this is such a simple thing to bill you just have to put the correct meter reading in and you can fix it. A simple job. So the really annoying screwing up is when they not only get things wrong, but totally fail to even try and fix it, and instead send "overdue account" and "final demand" emails.

Leaving So.Energy should be simple. I gave them, and Octopus, the meter reading for Gas on the day, and both used that, and the gas is right. Yay. It proves how simple this really is. The gas was not on smart meter.

But the bit that should be easier, the electricity that was on a smart meter, was not. Octopus actually used the meter reading I gave them. They also had smart meter readings from a couple of days later. Good.

But So.Energy did not, they had not billed for a couple of months. They kept asking for a meter reading to be entered on their web site, in spite of being a smart meter, but the site would not allow me to enter an import reading unless I also entered export (this was after they finally fixed their site asking for 7 separate electricity readings for the meter). The meter itself would not show export, so I could not comply. But remember, it is a smart meter, so they have the actual readings anyway.

When they finally raised bills, what should they do? Well, simple use the smart meter reading for the dates I left, for import and export, simple.

Using made up meter readings, especially when they demonstrate they have the actual meter reading (at least for import), seems to be to be straight forward criminal fraud, a lie for financial gain.

Let's be generous for a moment, and assume it was some idiot typing something daft, OK. The first I heard was "overdue account", for a bill dated when I left even though the bill was not on their web site before, so back dated. So I let them know the error, and advised the actual meter readings for import and export.

This the point that they could perhaps have redeemed themselves by cancelling those bills and issuing a correct bill. What could be simpler. If their web site had actually allowed me to enter import without export, of the meter had showed export, they would have used the reading I provided, as they did for gas, so this is no different.

But no, more demands, and a final demand. Each time I told them the error of their ways and got no more than an automated reply.

I messaged on twitter and they said they complaints dept was dealing with it - it is over two week later and nothing - no message even to say complaints are looking in to it and no new bills. I also explained that hounding me to pay a disputed and fraudulent bill was harassment. They said it was not, just telling me what was due and what would happen if I did not pay (further action), which I explained was in fact harassment. They tried to excuse it as automated, and I pointed out that automated harassment is still harassment. Interestingly nothing heard since (a week now) so maybe they turned it off.

There is a chance they try and "take further action", which will be interesting. But as they owe me for the export I can make that a counter claim for that, as well as filing a defence that their claim is based on a fraudulent bill. Their own original bill (that they later cancelled) proves they had the import star meter reading for the day I left, so making up a different reading really looks like fraud to me.

But what would be handy is some incontrovertible evidence of the actual usage, so I have sent a GDPR request for the meter readings to Smart DCC Ltd who managed UK smart meter data. Hopefully they can furnish me with the detailed reading. Readings that So.Energy could have gotten and have ignored. It will be interesting to confirm Smart DCC Ltd actually hold the data (they have not said they don't), and that I can get the data. I'll update if/when I get the data.

I should not have to have this hassle or harassment - it really should be simple! 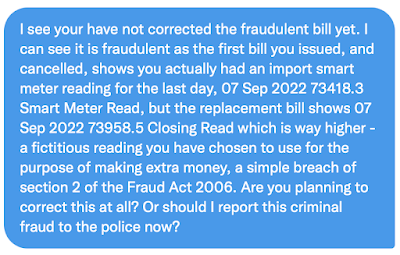 It gets worse! Bulb

I just got a bill from Bulb for £14k for usage from over 2 years ago. Thankfully this is pretty simple as OFGEM rules say you cannot back date billing more than a year. But still, I should not have to deal with this crap!