Escorted off the ship

Being "escorted off the ship" sounds a tad bad, but this was at the right point, at the end of the cruise, honest... 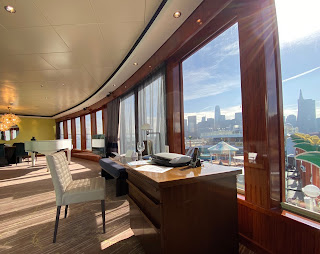 My mates and I are just back from a cruise (one hell of a holiday, thanks guys), and we stayed in the "Garden Villa" on the Norwegian Gem. It is big suite on the ship. It is often used for celebrities, or Sultans, and the like, but they also auction it to suite guests if not sold. Some times you end up with the likes of us in it!

[A slight aside, I do love how the concierge emailed crew to advise that even though it is three blokes in the Garden Villa, it is not a gay cruise, we have wives - even so people kept asking Mike and Simon if they were a couple, which was amusing]

Anyway, even though not actually celebrities, you do get treated as such, which is both nice, and also slightly embarrassing. I imagine real celebrities are more used to it.

I wanted to tell of one of the perks, which was slightly more embarrassing than we expected. It may be educational for anyone else staying in the Garden Villa on an NCL ship.

You get escorted off the ship!

This means that the concierge waits to the right point for when your bags will be ready (among the first bags off as "priority"), and escorts you from your room (Garden Villa) to the gangway where he/she hands off to an escort to take you off the ship. Just getting the to gangway means going via staff elevators, and past waiting queues of people, and at some points people being stopped and waiting for you to pass before they continue.

Once off the ship this continues, more queues of people and you get ushered past. We are taking to the baggage area, and our bags put on a trolly with a porter, and on we go. All very slick.

Just to be clear, we did not know quite what was going to happen, and were just following instructions from the escort.

Finally we get to immigration control, and a queue for the passport checking desks. This is a well established ship process it seems, and very slick. All the security know what they are doing and were expecting the escort and Garden Villa guests so co-ordinated to move us to the front of the queue.

We get to the border control person, and he is "who are these people, why did they jump the queue?". Our escort says "Garden Villa" which means nothing to him, and he ends up saying "nope, not unless my supervisor agrees" and calls him over. The supervisor just says "let them through and send to secondary screening". We can only assume this is somehow to punish us for jumping the queue, but secondary screening were at a loss as we were not on any lists or anything. They asked if we had any dairy products and basically sent us on with maybe a couple of minutes delay. We are then escorted to a waiting car to take us to the hotel.

[OK, last bit went wrong, and no car, and they went in to headless chicken mode, calling the ship, etc, so we just got in a taxi, which is easy enough in New York, but you get the idea. It was too cold to wait for it to be sorted.]

Now, this whole process is slick. As I say, the ship and port staff know what they are doing, and know about people being escorted, etc.

To be fair to the guy, I can see why the border control person was upset - why should someone be able to effectively pay to go to the front of the line? That said, I thought secondary screening for the hell of it was a tad petty, but what the hell. We were all being quite chilled over it - as to be honest we had imagined all sorts with the Coronavirus scares and ships being refused entry and so on. This was a breeze.

Then it struck me that this "everyone treated equally" is all very well, and laudable, but basically not how a lot of things work in practice. The ship definitely have tiers of guests. So do aircraft, and 1st/upper class get off first. EVERYONE in the queue for immigration control was on "priority disembarkation" which is paying to jump the queue of some 2,000 or so people behind them waiting on the ship, and they effectively paid for that by being in suites. Somehow none of that mattered to him. If he really did feel strongly about everyone treated equally he should have made a stand on that front, and said the people in the cheapest cabins should be coming through first, or at the same time. No, his only beef was that he actually saw that were jumped the queue.

I hind sight, it would have been better, and not really much delay, to have queued with the rest of the priority disembarkation passengers at that point, and we'd have done that if we'd have known what was happening. But we were just doing as we were told by the staff.

Anyway, if you are in the Garden Villa on an NCL ship, this is the sort of thing you can expect, and perhaps decide how far you want it to go, yourself.


I am, of course, interested in views. Should people be able to pay to speed up such tedious processes, or (at the other extreme) should royalty and presidents all have to queue with everyone else in such cases? Should 1st/upper class on planes be scrapped? Where do you draw the lines? Curious?
at February 16, 2020