Really boring post for your today...
On cycling out of Bracknell town on one of the cycle paths (see, I do use them when they go where I want), I hit a pot hole. I have been back and looked since and it looks really innocuous, but it was very jarring and my first thought is that it will have killed my tyres.
Unsurprisingly, within half a mile, or so, I had a flat back tyre. Crap!
I got a lift back from Tescos, and later walked in (3 miles) with my cycle repair kit and pump. The puncture was obvious, and not that small, so I used the sandpaper thing on the rubber and applied a self adhesive (skabs) patch, pumped up and cycled home. Perfect, job done.
Next morning, tyre flat! I investigated and it was the patch, it had popped allowing air out the side. WTF? I patched again and it immediately popped when pumping up.
I figured that maybe the glue goes off, this repair kit was a few years old, so ordered more. When that arrived, patched, and the same! 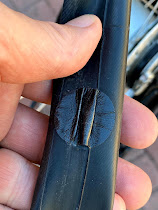 So I ordered a different make of self adhesive patch this time.
Again, popped as soon as inflated. This is mental.
I figured it was on a seam in the tyre, so I carefully trimmed that flat with a scalpel blade and tried again, no joy.
OK, time to go old school. I ordered good old fashioned repair kit with the rubber patches and the rubber glue.
I have probably done hundreds of puncture repairs in my life, and never had this trouble. 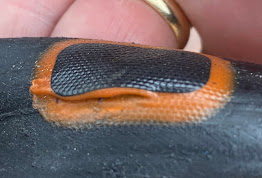 To my surprise, that did not work either, WTF?
Just to be clear, and thanks for all of the helpful advice, I did apply glue and wait for it to dry before applying the patch. I also, on some attempts, applied glue to the patch, which I don't normally have to do.
I tried the large patch sideways to cover where it popped, no joy.
I even applied a patch on top of the patch where it popped, no joy. 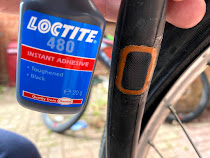 As an almost last resort I even used some Loctite 480 which is especially for bonding rubber. Close, but still popped.
This really is getting beyond a joke. I have never had this much trouble with a simple patch to an inner tube in my life.
I think I now have six puncture repair kits.
I have ordered a new inner tube, and some would say that should have been step 1, or at most step 2. Well, yes, except this is the back wheel with hub brakes, hub gears, and enclosed chain guard, all of which need removing, and at least one cable needs unhooking (and hence re-fitting and adjusting) and to be honest that seemed like a lot of hassle. Hence trying the simple puncture repair. 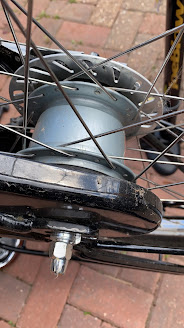 I then had a brain wave... This puncture is not a usual puncture. Well, apart from now being a tear around 5mm long because of the number of patches I had removed, it was on the inside of the inner tube, i.e. facing the wheel. This fits with it being pinched when I went over a pot hole - after all the tyres I have are meant to be puncture resistant. So not the usual place to get a puncture, which would typically be from a spiky thing through the tyre and hence on the outside. In fact, it was almost certainly exactly on the part where the inner tube is not going to be smooth when inflated, but actually a step where the inside of the tyre is in the wheel. This may be the clue, and why it only popped when inflated ing the tyre (I could inflate quite a bit outside the tyre with no issue).
My fix! Well, for a start I used the Loctite to weld the tear shut anyway, and applied a rubber patch over that. The trick, though, was a plastic card (credit card sized) bent round on the inside of the tyre between the wheel and in inner tube. A real hack, but magically the tyre inflated, and I have managed to cycle round the block and no sign of it deflating yet.
Yay, sorted, and, bollocks, the front tyre is now flat. That seems to be a much smaller slow puncture which was actually simple to fix with a patch as normal (well, so far).
So yay. I do have a spare inner tube coming tomorrow, and I hope I don't need it.
I would stress that this has taken (I think) 4 days now, and so given my run of luck I fully expect to find both tries flat tomorrow, probably pecked by a crow or eaten by a squirrel or something...
Update: Using a card was certainly a clue, as it lasted a lot longer than anything else, but today (the next day) the back tyre is flat again - so fun with dismantling stuff when the inner tube arrives. FML.
... And someone has "borrowed" my Allen keys, arrrg! 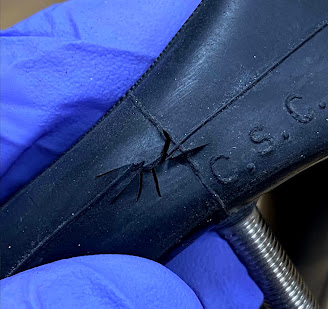 Update: I have two inner tubes and new Allen keys. Yay. I figured I would change front one first. It literally exploded in the tyre at around 50psi. WTF?! So now waiting until tomorrow for another new inner tube. I did not have this on my 2020 bingo card.
Looks like it is a full moon at just before 5pm today - is that a bad sign I wonder?
Update: Finally, new inner tube fitted to the back. All working. Pain in the arse to take it all apart though. 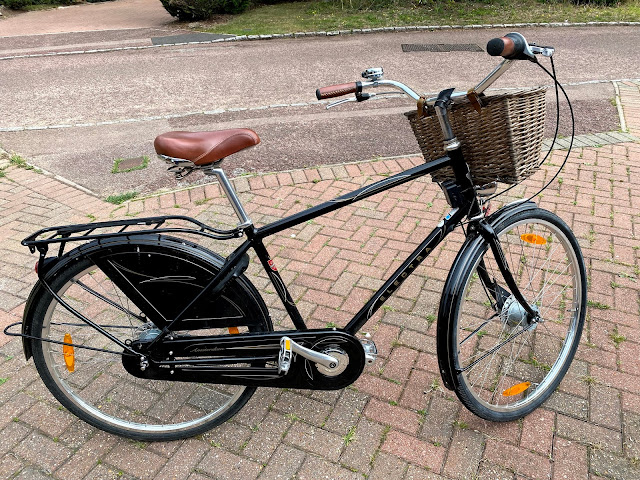 P.S. I now find I put the front wheel back wrong and have been cycling with brakes partly on - I thought I was just unfit (which I am), but that was daft. Finally all sorted now.
at August 01, 2020

Email ThisBlogThis!Share to TwitterShare to FacebookShare to Pinterest
Labels: cycling