There is a lot of talk of changes to the Highway Code that are happening, notable rule 170.

Some motorists are really cross at the "new rule". There is always some bad feeling between cyclists and motorists, but this is especially odd, as the "change" is not really a change at all. So the only people cross over it are those that clearly have no clue the rule already exists.

How is it not a change?

The existing rule says "watch out for cyclists, motorcyclists, powered wheelchairs/mobility scooters and pedestrians as they are not always easy to see" so motorists already have to be on the look out for pedestrians when at side roads.

It also says "watch out for pedestrians crossing a road into which you are turning. If they have started to cross they have priority, so give way". It makes it very clear a pedestrian crossing a side road has priority.

The "new rule" only makes a very tiny change to this, as it requires motorists to give way to pedestrians "about to cross the road".

But it is hard to see how that is not, in effect, already the rule. Motorists already have to watch out for pedestrians, and a pedestrian can change from "about to cross the road" to "crossing the road" in a tiny fraction of a second by putting their foot out. I mean, this can happen far quicker than a car getting to the pedestrian, so the motorist (watching out for pedestrians) has to allow for that happening and be prepared to give way to the pedestrian crossing the road at a moments notice. It is hard to see how this is different to the new rule. So in that respect the rule has not really changed. The only other aspect of this change is from the pedestrian point of view where they may feel empowered to cross a side road rather than wait for a car - but, as always, pedestrians have to be on the look out for motorists unaware of, or ignoring, the rules.

All of the back-lash I have seen on this ignores the fact that pedestrians crossing a side road ALREADY HAVE PRIORITY over vehicles turning in to the side road.

The Highway code even has an image showing a pedestrian that would not see the car is planning to turn (even if they looked a moment before), which is, I am sure, why the rule exists. 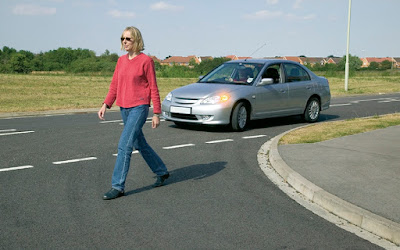 It is obvious from the posts on social media that a lot of motorists have no clue about rule 170. I also see this every day as I cross a side road on my walk. The typical scenario is a car, STATIONARY on the main road, waiting for traffic the other way, and I start to cross the side road. The car then expects me to stop in the middle of the road to let them turn in to the side road because of a gap in the motor traffic. I don't try to get run over, but I do make it clear that, obviously (as per the Highway Code), I am not expecting to stop. This has led to enough drivers getting cross (apparently they never read the Highway Code) that I even have cards with rule 170 printed on them to hand out. I have even had one car stop (after not hitting me), and driver and passenger get out to chase me down the road - all because they don't know the rules of the road!

So this non-change to the rules makes no difference on its own. What will make a difference is all the publicity it generates. Hopefully it will make drivers aware of the rule that has always existed, and the somewhat cosmetic change to that rule, and they can start giving way to pedestrians at side roads as they always should have.

I do hope they clear up the anomalies I have noticed in the rules though...