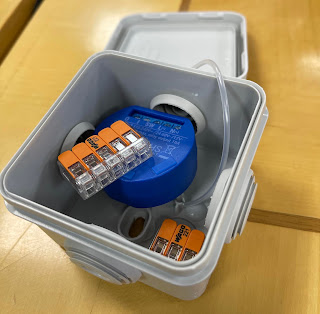 I have used Shelly1 for a while, and have loads of them in use.

I have used them in the house here on my door bell circuit which runs from a standard alarm system 12V battery box. All fine.

I planned to use with an alarm system as well, running from the 12V battery box. First two were fine, but then the next did not work. I tried another and it also did not work.

I did some googling and people report that the 12V is meant to be exactly 12V. I must ask Shelly to confirm really, but the comments were 12V and not a battery (which is 13.8V). My example use was actually 14V. It would be a pain if it could not run from a standard 12V battery box.

Well, pushed for time, I found some 12V LDO linear regulators and got for next day. Oddly when installing these to give an exact 12V clean DC for the Shelly, the ones that were not working still did not work?!? I tried yet more, and they did work.

What is even weirder is one that was working off 14V did not work off 12V, so I had to find another. It is a good job I had 20 of them.

So it seems the 12V working, is, err, fussy, and inconsistent.

Anyone else seen this?