I am pretty sure I did cover this in school, but I did not quite appreciate how significant it is.

One if the things that always gets me is the EXACT amount of CO₂ pulled from the atmosphere by a plant for it to grow, that I then eat, is the exact amount of CO₂ I then breath out from burning it (unless I use some of that carbon to get fatter, then that is released when one day I am cremated or eaten by bacteria). And the O₂ that is made by the plant growing is also the EXACT amount I need to use to breath to burn that plant and consume it. OK some of that goes in to poop that is used (O₂) and released (CO₂) when that is digested by bacteria. But the CO₂ is the same. It goes around in circles. The circle is complete. It works.

The carbon cycle is all about how carbon moves around in the world. Wikipedia has this the cool image. 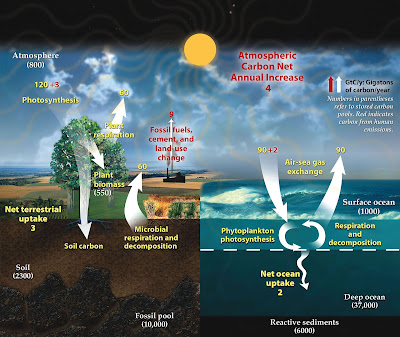 So how to stop climate change? - it is so so simple - stop burning old carbon (i.e. fossil fuels).

It is fine to grow trees, make wood, and burn that, the carbon goes round and round.

It is fine to grow food, eat it, and breath out, the carbon goes round and round.

AFAIK cows farting is an issue, as that carbon ends up as methane with has a bigger impact, but AFAIK for less time, and apparently the answer there is feeding the cows seaweed! But generally using carbon to grow food to feed and animal that we then eat and breath out is again OK, carbon goes round and round.

Don't get me wrong, loads of other issues, too many cars and not enough walking and cycling, all sorts, but just looking at climate change, it is all down to the carbon. We'll improve a lot of other stuff by fixing the climate change issues as a side effect!

Almost anything we do with "recently" captured carbon then going to the atmosphere matters not a jot. Pull carbon from atmosphere and release it a year later - not problem. What matters is all that old carbon in fossil fuels being burned. Unless we want an atmosphere that was around a few million years ago, we need to stop.

Heck, even making fossil fuels in to plastic which we don't burn, is not an issue! What matters is old carbon going to the atmosphere - STOP IT!

Email ThisBlogThis!Share to TwitterShare to FacebookShare to Pinterest
Labels: CO2