When I started using the Espressif processors I started with the ESP8266 and Arduino development platform. It is all C++ based (which is not really my favourite). But it is a really good starting point for anyone wanting to play around with microcontrollers.

One of the key things here is the available hardware. A "programming" lead is just a USB serial which is available for a few pounds, The Arduino development platform is free to download. But most importantly there are thousands of very cheap ESP8266 based devices on the market, easy to use, and many easy to access programming pins. The ESP8266 is possibly the most popular basis for IoT (Internet of Things) devices like smart light switches and the like.

However, having managed to make some PCBs (milled from copper boards) for ESP8266 based modules, I eventually decided to move on to using the ESP32. It had a number of advantages as a processor itself, but also the ESP IDF which works on linux and MacOS making it easy for me to code in C, which I prefer. The ESP IDF and various libraries are still a work in progress and far from perfect, but generally work well. I have made a load of projects based on ESP32.

But being ESP32 means I lack the thousands of ready made modules that I can use. I have designed and made loads of circuit boards myself, including a complete access control and alarm system.

What is now nice to see if that there are finally some ESP32 IoT devices coming out. Manufacturers are moving to ESP32 based boards. One of the most useful I have found is the Shelly 1. What is especially nice is it has direct pins for programming access - without even taking apart. It is simple, just a switch input and a relay output, but runs of mains, or 12V DC (do not use the GPIO pins when running on mains as they are live).

Shelly have just launched the Shelly plus 1, which is basically the same as the ESP8266 based Shelly 1 device, but ESP32 based. It also has programming pins easily accessible (though smaller), a relay and switch input. In this case the 12V is a screw terminal rather than a link you have to change. 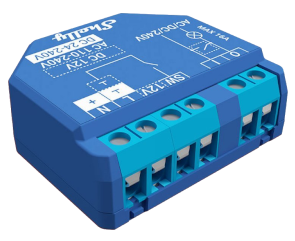 The good news though is I can load my own code, ESP IDF based, on to this. It means I can use these modules directly on, say, my access control and alarm system. I had found I needed various simple 12V single input modules for the likes of a door contact or fire alarm input and previous used boards I made. But at this low price the Shelly plus 1 is a no brainer, as they say. Using my code I can set secure boot, and encrypted communications as part of the alarm system. Even something simple like an alarm bell could use one (single output for bell and single input for tamper).

My first actual project with one of these is for a servant bell system. I have an actual bell, which I want to "ding". I am using 12V DC, but the bell really only "rings" using AC. Using DC you need a small pulse to do a clean "ding". Too short and the clanger does not hit the bell. Too long and it hits it and holds, making more of a "clunk" than a "ding. Get it right and you get a nice clean "ding".

I was using tasmota32 code for this, but that is designed to do pulses of 200ms at least and not that consistent - perfect for blinking lights and the like, but no good for what I need.

So, back to my own code, ESP IDF based, using my existing libraries, and I am now starting something a bit like my own tasmota in a way - programmable inputs and outputs. Expect the outputs (which is all I have coded so far) are configurable to the millisecond.

I have found 15ms seems to be the sweet spot to make the bell ding...