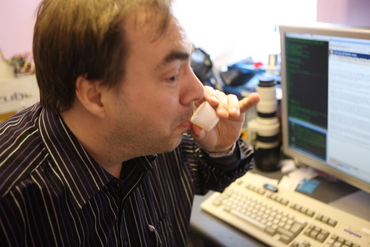 Well, I got a shapercube, and last weekend I built it. It is a commercially made set of parts for what is essentially a reprap 3D printer but a nicer housing. Makerbot thing-o-matic is a similar affair made from wood.

The instructions were not bad - but some omissions and mistakes delayed things. I suspect from scratch I could build one in a day now. As Kev says, you end up being an expert in something you only ever do once.

That was last weekend. I have spent all day Friday and today making it work. Many many minor hurdles.

Making the first layer stick was one. It is an acrylic sheet as the base. That sticks! It welds to what you print. Bad!. So kapton tape on the acrylic - that sort of sticks but 2 hours in to a print it stop sticking and what you are printing slides away and is useless. Seems kapton tape distressed with a penknife may be the trick. The real solution is a heated bed (tomorrows challenge).

Getting the heat right is a challenge and if you manage to over heat it, well, yes... All today was spent on that. You bugger your hot end for a start. I have cleaned it out and found a small enough pin to clear the nozzle, but the real trick was a squirt of WD40 down it. ABS around 230 degrees C... In fact, in my previous attempts I not only charred the hot end, and burned my thumb, I also killed the thermistor and fried the ADCs on the controller board. Spare parts arrived Friday morning from RS and Farnell...

The other gotcha is there is a nice tool called repsnapper which controls it. This is good, but deceptively it seems to be happy to load an STL file and convert to GCODE and, well, print. That is a bad idea. repsnapper has no real idea on making GCODE from an STL and what you really want is skeinforge. Using repsnapper just to send the GCODE file and manually control things. You have to tweak a few settings to get it right, and the main one is the arduino firmware feeder steps per mm setting, but then it is very cool.

Of course you need to make things in the first place - well design them... It seems openscad is the tool. It allows 3D objects to be made programatically from 2D and 3D primitives. It is pretty powerful. The other place to get stuff is thingiverse - either STL or openscad files. 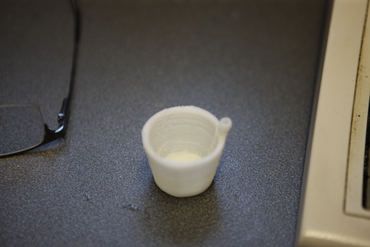 But, yes, after 2 days cleaning up mess - I printed the thing I drew last weekend. It is a sort of shot glass (to toast the first print) with integral straw!!

Now to print some of the parts as spares... They should in fact be a lot quicker and easier than the shot glass.
Posted by RevK at 19:21:00