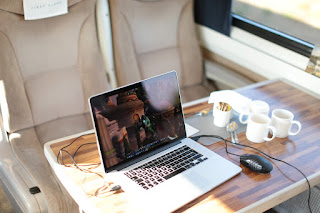 I finally found something worse that Internet in a Greek villa on Rhodes island.

Trying to play WoW on a train (East Coast) on 3G.

Latency varying from 250ms to 4s and often dead spots which can last minutes, especially tunnels.

I managed to the Utgarde Catacomb quests with very little dying, though in one case I had to wait a couple of minutes to find out that I had in fact died and not won the battle.

One advantage was that I could fly all the way in to the catacomb before my mount dropped me because of tunnel breaking communications. The game client itself does not know where flying is not allowed, it is the server that tells it.

Of course, a fixed IP address on my 3G does rather help. Yay! for A&A data SIMs.

Overall I have to say that I am impressed with Blizzard that it is possible to play at all, and if not for the tunnels I am sure questing on 3G on 300ms or so latency would be usable.

Obviously this would all be totally useless for any sort of PvP or raids with other players.
Posted by RevK at 16:43:00