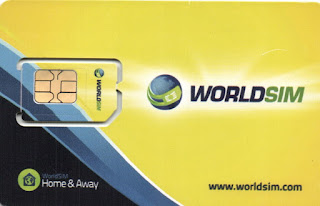 Well, I expected this to be a con, and wondered quite what sort of con it would turn out to be - so I got one on a BA flight to Venice.

The SIM is clever, it has multiple IMSIs allowing it to work in various zones, and have cheap calls. In some cases it does a call back for outgoing calls (I assume their interconnect makes that cheaper somehow).

It is advertised as coming with a UK and US number. The US number has to be requested (simple process) and has a 25c/min incoming call rate, which is (as I understand it) consistent with the way US mobile numbers work.

However, the UK number is free to receive calls in the UK and during the week in most of Europe as well, which is nice for roaming.

Well, obviously, I was not fooled for a second by the "Calls to X countries, from 1p/min". As expected only one country on the list (USA) is 1p/min and the rest are all a lot more. But this was not actually a lie, much like the use of "up to" in other contexts.

Well, it is not, simple as that. It is not actually a UK number, and not "considered a UK number" by any carrier from which you can call it.

It is a Manx number. Isle of Man is not in UK, and, more importantly, anyone calling this number does not find their telco "considers it to be a UK number" for charging purposes - they charge more. E.g. weekend BT main call rates for UK mobiles is 3.406p/min but for this Manx mobile it is 16.8p/min. A big difference for those calling me. Similar (or worse) differences exist with other carriers.

It is a cunning con, as they don't publish rates to call the number - you would not expect them to as it is (a) not a premium number and (b) down to the telco you are using to make the call. However, saying (incorrectly) that it is a "UK number" implies to the customer that it is in fact a "UK number" and so is normal rates for callers to call the "UK number", which is not true.

It is therefore, in my opinion, a con. And BA should not advertise it as having a UK number, and neither should WorldSIM. Trading standards seem uninclined to take up the matter, sadly.
at March 11, 2013