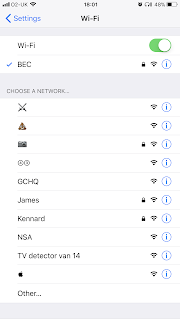 I have tried many access points over the years, and some of them allow you to use unicode characters (outside the normal ASCII set) in SSIDs. i.e. the names of WiFi networks.

It seems many devices understand these and display them correctly, which is nice. However, annoyingly, a lot of access points seem to either disallow use of interesting characters, or at least make it difficult.

Why would you use these? Well, one rarely has to type an SSID, you pick from a list, so why not make them more fun - with emojis and the like?

So what have I found with the latest APs?

I noted on the new Aruba APs that they have the useful option of SSID Encoding, either Default or UTF-8. This was encouraging. You have to select the advanced settings to see this though.

The trick, of course, is to save the config, and take a look, and if possible tweak and upload. This works!

Yay, but in various tinkering I spotted that some parts of the config file saved back in a different way?!

Yes, the character in question had been percent/hex encoded. I found that I could type that in the ESSID box on the web based config. This is a lot less hassle than manually editing the config file!

What is strange is that some I cannot, seemingly those starting %F rather than %E, for example.

Some devices cannot show them, obviously... This is my camera. Note it sees one "box" so understands that the bytes are a single UTF-8 character which it cannot display (I also tested with two characters showing two boxes). 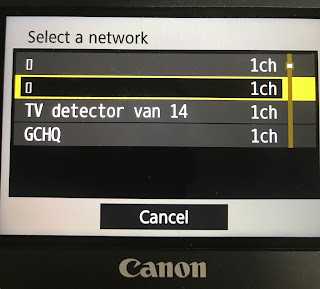 And finally, the magic changing SSID :-)

Using U+F8FF, which is a "private block" unicode character, on anything apple, you get the apple logo. For me I see that here: 

On other machines you don't. I was hoping for the windows logo at least, or even a Klingon symbol,  but my son's windows laptop just showed a box! Shame. 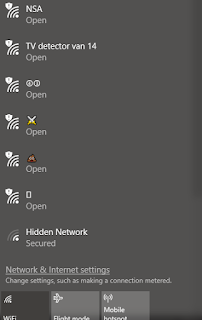