Being a fucking idiot, or just getting old.

I am seriously kicking myself over this, massively, but the outcome is not as bad as it sounds!

I have visited the US before, and I know one needs an ESTA. I wanted to ensure it was up to date as considering a canal trip next year maybe, which involves US.

So, I googled ESTA, and made a huge mistake, I click on the first link. I won't give the web site the credit of being listed on my blog post.

This was fucking stupid, and I really am not sure if just because I had drunk too much or what. Being a bit drunk is an insight in to being a bit stupid at times.

The real trick is that is was not a .gov domain.

The problem was that their web site was very slick, and more so than the "proper" US Gov web site. That should have been a clue.

At the end I realised they charged me $99 to my Amex. Well done for the Amex app telling me this. And calling Amex was no help as they said basically "the site is legit and some people do use them". They did advise to complain though. They gave the impression I am far from the first to make such a call to them!

What is good is that (a) the ESTA went through, and (b) they emailed back confirming that $85 processing fee is now refunded because of my complaint. 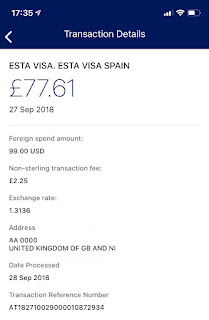 What is odd is the way it showed on Amex, as "ESTA VISA SPAIN" and as a vague UK address. They clearly automate it all and so the $85 is money for old rope. I imagine they have a simple policy to refund the processing fee when asked so it makes life simple and no actual loss to them.

Obviously I should not have fallen for it, and I feel like an idiot, but at the end of the day this also saved some hassle. I went to the ESTA site and it insists on US address, which was skipped via this "agent". As it was "On a bloody cruise ship" that was not easy to do and so it was hard to progress that on the real site.

Email ThisBlogThis!Share to TwitterShare to FacebookShare to Pinterest
Labels: ESTA