I have been working with ESP8266 controllers and NFC readers. My preferred reader is the PN532 based Elechouse reader. As I have noted before, buy from Elechouse direct as there are a lot of bad copies!

However, when connecting to the processor I have a choice of interface. It is one of the rather nice features of the PN532. There are three interface types I²C, SPI or HSU.

I²C stands for Inter-Integrated Circuit, so the acronym is IIC, but someone thought it would be fun to treat letters in an acronym in the same way as algebraic variables and write II as I². Arrg!

It is a simple bus for connecting devices and uses a clock and data line. Wikipedia has details (here). Both clock and data lines have a passive pull-up resistor and are actively driven low by master or slave. The protocol is well defined, and works well. It allows multiple devices on one bus and is very popular for a lot of peripherals.

Looking at the Elechouse web site I saw this: "On-board level shifter, Standard 5V TTL for I2C and UART, 3.3V TTL SPI" which rather concerned me. The ESP8266 is all 3.3V, and I did not want to have to mess about. This immediately put me off using I²C. However, looking at the schematic, the level shifter is completely optional, in that the same two pins are used for SPI, I²C and HSU and connections have these at the 3.3V level direct from the PN532 (via 100Ω) as well as via the level shifter, so it can be used for HSU and I²C if you want.

✓ Only two wires, simplifies wiring and frees up GPIO pins
✘ ESP8266 does not have hardware I²C support, so uses more processor and is slower
✓ ESP8266 has software I²C which means almost any GPIO pins can be used for clock and data, making PCB layout much simpler.
✘ Data sheet suggested level shifted to 5V (which turns out to be optional)
✘ Both clock and data use passive pull up resistors, meaning they can be subject to more interference on long lines

SPI stands for Serial Peripheral Interface. Wikipedia has details (here). It is more complex than I²C in the way it works - using 4 wires not 2, and allowing different configurations. It is also quite fast, allowing several MHz operation.

The ESP8266 has hardware support for SPI, which is good, but the downside of that is that specific GPIO pins are used for 3 of the 4 signals, so PCB layout is more complex.

✘ Four wires, so more to connect from controller to reader and uses more GPIO pins
✓ ESP8266 has hardware support, so allows faster working
✘ ESP8266 has hardware support, so the pin assignments are fixed making PCB layout more complex
✓ Lines are driven (from master or from slave) rather than using passive pull ups
✓ 3.3V direct connection to ESP8266

HSU stands for High Speed UART. This is simple old fashioned serial communications, on a Tx and Rx line, and defaults to 115,200 Baud.

The ESP8266 has hardware support for UART, and will work at these speeds. The ESP8266 library has good, interrupt based, serial handling. Unlike SPI there is actually a choice of pins that can be used, but this is still a tad limited. Of course the ESP8266 uses the UART for other things like programming and debug, but there is an additional Tx available for debug (Serial1).

✓ Only two wires, simplifies wiring and frees up GPIO pins
✓ ESP8266 has good hardware and library support for serial UART
✘ Pin usage is a fixed, but a choice of two sets
✘ Data sheet suggested level shifted to 5V (which turns out to be optional)
✘ Serial on ESP8266 is used for programming and debug
✓ Tx and Rx are driven (one each way) rather than passive pull up resistors
✓ The same connector can use used for programming and connection to PN532, reducing number of headers needed on the board

What did I do?

I was initially put off by the level convertor comment, leaving SPI as the only option. The first project I made using an NFC reader was connected to weighing scales, and used the serial on the ESP8266 to talk to the scales, so that rules out HSU. So SPI it is.

There are 4 connections needed (so 6 wires including power and ground). This means you can use 5 pins in a row on the ESP8266 (VCC, D13, D12, D14, D16) and GND to make a 6 way connector. Sadly the pins are not quite the same order as on the Elechouse PN532 board. This just means the connectors need wiring carefully.

This works well. I then used the same design for the door controller.

Firstly, the fact that the level convertors are optional means I²C and HSU are an option. I could have, for example, used I²C on a smaller ESP-01 for the scales rather than using an ESP-12F and SPI. However, the use of passive pull-ups is still a concern if the reader is on any length of wire from the controller as may be the case on a door controller. I could have used HSU, as the ESP8266 libraries have a soft serial mode, which can work at the scales 9,600 Baud rate, so could have used Tx/Rx for PN532 and one of the other pins to talk to the scales serial interface, and used an ESP-01.

I have since tried HSU, which just works, and is only 4 wires to the reader (power, ground, Tx and Rx). I was concerned that it would be slower (115,200 Baud rather than 2MHz) but actually it is slightly quicker (28ms rather than 30ms for InListPassiveTarget on same card), and a lot of the time is the PN532 operation and the NFC card itself. The Baud rate can also be configured!

It also turns out that had I used the more usual GPIO15 as the SPI SS pin not GPIO16 I would have actually wired the PN532 such that it could be used for HSU or SPI, as the PN532 uses MOSI for Tx and SS for Rx and the ESP8266 alternative Tx/Rx for UART0 are on those pins!

In practice, what I have done is make a 4 pin header with GND, 3V3, Tx and Rx. This is the same order as the 4 pins on the Elechouse board, but is also a header that can be used for programming the ESP8266.

I am slightly kicking myself for not trying HSU and I²C to start with, but to be honest I was just pleased to get things working. Freeing up two extra GPIO pins is nice, as is having fewer wires to reader, and pins in the same order both ends of the cable. The libraries do, however, make it very easy to change interface. Just remember to set the switches on the Elechouse board to match what you are using. 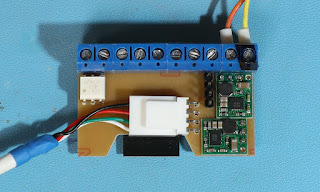 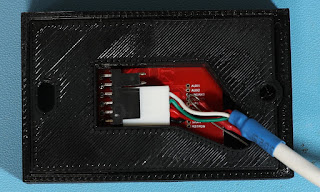