It is funny how we like to see numbers clock over, whether a simple anniversary or birthday, or the odometer on a car, or even years.

Until the year 2000 I do not recall anyone having any issue with the common way decades were numbered. The '20s were 1920-1929 (inclusive), and so on. No issue, no doubt, no confusion. Sadly the year 2000, being a change of millennium, caused many to say "technically the new millennium does not start until 2001 as there was no year 0". This is one rare cases where I err aware from "technically correct" for a change, and even question if it is technically correct. The years are projected back from a more recently invented calendar and indeed go from 1BC to 1AD in one calendar. So on that basis, yes, a millennium starting at the start of 1AD means a new one in 2001. But why consider the start 1AD not 1BC? All evidence suggests that was not when Jesus was born, if he existed, so you should probably consider the third millennium starting maybe spring 2004 [citation needed]. You are picking an arbitrary start point - why?

However, it depends which calendar you pick obviously. We use the Gregorian calendar, but other calendars (e.g. astronomical) do have a year 0 and otherwise align with the Gregorian calendar (for current years). So one can be "technically correct" and still have a new millennium starting at the start of 2000 without any difficulty.

My point all along was that the only reason to consider the change of millennium as "special" in any way is the base 10 numbering that we use, and that a clocking round of 1000 years happens very rarely (oddly enough, every 1000 years), and so the only logical point to consider "special" is when the year number "clocks round" 1999 to 2000. If you are not doing it then, then why even consider 1000 special, why not consider multiples of 324.6 years as "special"?

I had thought this was all old news, but, to my surprise, I see people even now on social media saying the next decade does not start until 2021 as "there wasn't a year 0", continuing this nonsense. Sorry, but (Gregorian) decades only make sense as "special" if you consider them to be the years ending 0 to 9 (inclusive), end of story. So if anyone says otherwise just say you are using the astronomical calendar which does have a year 0, and see how they cope with that. Good luck.

But this may also help (thanks to xkcd) 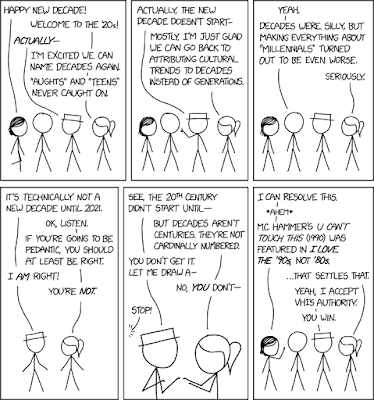 
Anyway, on a more amusing note, it seems Bulb may have finally fixed my account so I can submit a meter reading (they have been messed up since I signed up for no apparent reason, and just emailed me to say fixed). Yay, so a meter reading is needed.

This has resulted in my spending many hours on the 31st Dec, turning on extra high power kit in the house for a while, and even running the tumble drier, wasting many pence worth of electricity in order to get this picture (well, maybe not wasting as it means gas heating needs less power as house is warmer)... 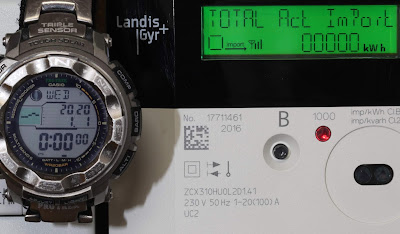 It is a thing of beauty, is it not?

To my surprise Bulb had no problem with my submitting the meter reading of 00000.

All the "there was not a year 0" people would say I should not consider my meter to have rolled over until 00003 (or whatever it was when first installed).


There is one clock I'd rather not reach 0 though :- 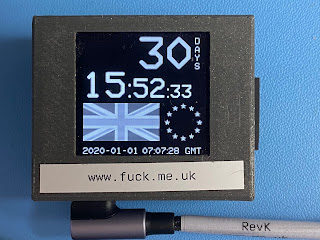