I have been diabetic for a few years. My mum was too, since she had me, and we suspect this is what did my grandfather in (undiagnosed) to be honest. It is often hereditary.

I have often felt almost like some sort of fraud. I have insulin, as just taking tablets was not working, but the process is to review my HbA1c, maybe once a year, which is a test that sort of gives an average blood glucose over some months, which is not that good a "picture". But (having lost some weight) I am on a low daily dose of insulin now. That has advantages (one jab) and disadvantages (cannot adapt to changing circumstances easily). I have tablets too. It is "mild" compared to many people.

However, when I started losing weight, I also decided to buy, with my own money, at a cost of some £100+ a month, a continuous glucose monitor (CGM). It sticks on my arm and logs interstitial glucose levels and keeps a history. It has its quirks, like only 8 hours of data (and some times I try and sleep more than that!) so has to be scanned at least that often for a full picture. It is also maybe half an hour behind blood sugar levels, so I can feel hypo when it shows higher as it has not caught up.

However, I have found it hugely useful with managing my diabetes and diet. It is really good for making me aware of the wrong things to eat (basically sugar) and what I can eat in moderation and get away with in, and how much I can eat of something without getting away with it. This is mostly feedback of history rather than "am I really hypo now" which a blood test can do.

Recently I was able to see what a "normal person" is like on one of these. That said, it was rather odd. A friend of mine (who will, no doubt, read this blog) was diagnosed with gestational diabetes. So I gave her a CGM (and another as she knocked the first one off on a car door, FFS). She did not want to do the requested 8+ finger pricks a day, so my treat.

The thing is, having used the CGM, no way is she remotely diabetic. This is one day (with her permission)... Yes, charge that battery FFS! 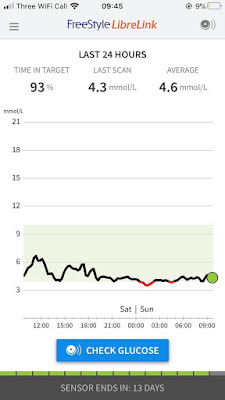 Subsequent days I have seen are lower than that. She does not spike over 7 even when eating stuff she knows she should not.

For me this was really interesting as I did not know what a "normal", non-diabetic person looked like on a CGM, and now I do. It puts my graph to shame, and I am well controlled (apparently).

Like I say, I almost felt like a fraud, until I saw that, and I know I am nothing like that good. My diabetes is mild, under good control, but very real. I don't feel like a fraud any more, and even wonder if I need fast acting insulin doses when I eat as I can peak at 10 mmol/l, and occasionally more.

P.S. As requested, here is one of mine, on a really good day... Most days I am peaking higher.