The MK Grid Plus rabbit hole

MK is a good brand of switches and sockets and they are always good quality and solid, so when looking fo some new light switches, they seem like a good choice, albeit not the cheapest.

But I want some switches that are "retractive", i.e. just push switches not rocker, as they control a Shelly / tasmota smart switch module and not directly connected to a light.

MK do some of these, and they actually do modular switches, so I can mix and match what I need and where. In some cases a "two way and off" retractive switch to work a dimmer is ideal, and others a single retractive switch, and in some cases one of each on the same face plate.

Sadly it seems that almost nobody has the whole range on their web site, and the whole range is huge. They have a load of styles. There are catalogues from MK that list just one style, for example. The problem is, at the start, you don't necessarily realise what is possible, nor what is available from suppliers. Just to be clear, Screwfix is first port of call as it is a 4 minute walk from my front door. As per comments, it seems https://www.gil-lec.co.uk/ stock a good range as do https://www.tradesparky.com/

This is a good start, I now have a working retractive light switch, and can confirm that in a deep back box there is space for the switch and a Shelly 2.5 and a Wago. Working nicely. 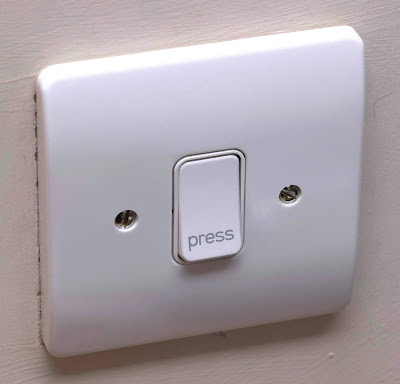 It proves the solution fits, and works, so now to consider if I want to change other light switches in the house, as I make things "smart". But I need to make small changes to the way things work - my wife is not going to allow me to change one switch at a time from the brushed steel light switches we have everywhere to a plain white switch like this. I am not even sure the "press" label is going to go down well.

But hang on, the metal faceplate is an enamelled aluminium, somewhat "industrial" to pass the wife test...

At this point I think I have something that may be close enough to what we have now. The switch is white, but no "press" on it, and the front plate is brushed steel. But not sure. If this is the best MK do it will do, so I ordered a few.

Then I discovered they have a range of other front plates, arrrg. And there are Grid plus, and Euro modules as well. Complicated. It looks like "Aspect" may be what I want... They are available in something like 13 different finishes, including brushed stainless steel. They are also screwless.

One of the best documents showing the different styles is a technical document from MK. Logic Plus is traditional plain white with visible screws, Aspect is rounded raised screwless in a wide variety of finishes, Edge is flush to wall - with screws - with a wide range of finishes, Albany is a heavier/thicker angled boarder and industrial looking with visible screws in a smaller variety of finishes, Metalclad Plus is white or enamelled grey metal - very industrial style. So, let's look at Aspect in Brushed Steel finish I think...

OK I think we may finally be getting there. It looks like I have found switches that are :-

I think that will meet with approval and be close enough to what we have to allow changing one switch at a time without looking wrong. Fingers crossed.

What is also fun is that MK have a really big range of modules. Including coloured indicators and a buzzer module! No, I have yet to find a use for these. They have loads of switches with pre printed labels, so it you make up one of their large grids of switches, you can have them clearly labeled.

P.S. WARNING! other manufacturers make grid switches which are not interchangeable with these, and sometimes when searching the MK part number they come up, and "look" right - bastards!

And to add to the fun there are Euro modules, which are actually very simple 25mm x 50mm or 50mm x 50mm rectangular modules. I have seen these for networking before. For now. I'm going for MK Grid Plus.