The trick to soldering these buggers (QFN16)

As I mentioned, I have been using an FT230X USB serial chip, and using it in the QFN16 package. There is an option of an SSOP20, which would be a lot easier to solder but takes more space. However, I think I have the trick of soldering the QFN16 sussed. 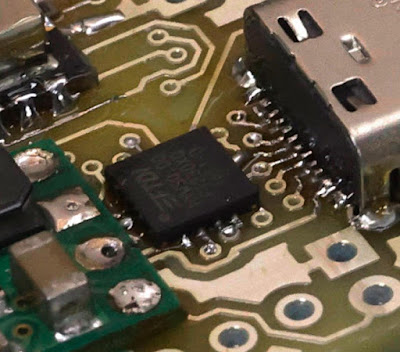 My first attempt was fine point soldering iron into the edge of the chip, that worked but is really fiddly.

My second attempt involved a hot air gun, a very hot one, in fact this Weller hot air gun. 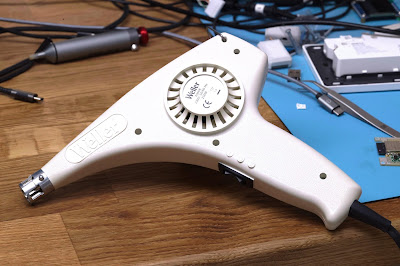 Not cheap, but works well. It should not be hard to get one of these. Indeed, I got one a few weeks ago from RS - I ordered and as normal it arrived next day. Sadly, a week later it died (heat but no fan). So sent back.

Ordering another should have been as easy, and RS listed 32 in stock, but when I ordered nothing arrived. Indeed, my order showed as on back order for shipping 1st June. Yet the product page insisted 32 in stock for next working day delivery. WTF?

So cancelled RS and ordered from Farnell. Again, a normally very reliable supplier. They too had in stock for same day dispatch.

Again nothing arrived, and they contacted us and said they had cancelled the order, and refunded the card! Why? well as a "first order" and "the type of product" for "security reasons" they needed us to pay by bank transfer, not the Amex card I normally use, and ignoring that we have been buying from them for 12 years. WTF?

We paid by fast payment immediately, and they said accounts had gone home (this was 3pm Friday). They said they would ship Monday. Nothing. Finally arrived Wednesday even though the web site says not shipped at all.

What is wrong with people? "heat gun" is not a real "gun". Arrrg

Step 1: Tin the pads and the centre pad, being careful not to short any pins.

Step 2: Heat the board to melt the solder.

Step 3: Put a drop of liquid flux on the chip pads.

Step 4: Place chip on melted tinned pads and keep heating a bit - it should snap in to place nicely.

Step 5: It can be useful to do the USB-C connector at the same time thought that helps if you also tin the connector first.

That was it - works perfectly.

Note, whilst waiting for the Weller, I tried a more "normal" hot air gun and it blows way too hard and sent the chip flying long before any solder melted.

Obviously even better if you have a solder paste mask and solder paste, but this works too.

I have since redone the layout slightly to make the pads slightly longer, and make it a lot clearer when adjacent pins are joined together, as the track layout allows such tracks and vias to be very close to each other and so solder bridge easily (no solder resist on these boards) which looks bad until you realise they are joined under the chip! Making that clear outside the chip will help avoid problems.