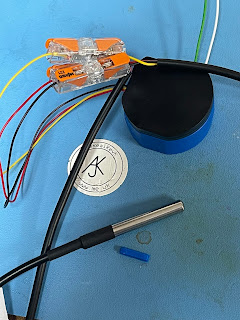 The tasmota code has a proper thermostat mode, but it is not in the pre-built code, so I wanted to work out a way to do this with simple rules.

There are examples, yay... But I was struggling to make sense of these.

This works, but every second or so it is doing Power 1 or Power 0 constantly, and reporting that on MQTT, which is a tad annoying. It is worse if you have triggers on power setting to send publish commands to other things, etc.

What I came up with is not complicated, and seems to work:-

The trick is the this sets the var1/var2 meaning that the temperature is no longer triggering an event all the time once it has changed.

Bingo, it works, and is a pretty simple pair of rules. Probably worth using mem1/mem2 as the 25/29 values here to be tidier, but still. Not complicated, and reacts immediately when the temperature passes the relevant threshold.

It also means the sensor can be a separate Shelly from the relay easily, only sending the publish to change the relay on change, which is also a big improvement.

P.S. For those that do not know, a Shelly 1 is a small ESP8266 based relay/switch that can switch mains power (16A) and typically about £8 (the blue round box). It has good firmware anyway, but Tasmota is an alternative firmware (open source) which can run on most ESP8266 and ESP32 based smart devices, so can run on a Shelly 1. DS18B20 is a common temperature sensor, and more than one can be connected in parallel even (the black wire and metal tube). Shelly do an adaptor (needed for DS18B20 as they would otherwise be mains voltage) to connect to temperature sensors (the black round thing on the Shelly 1).