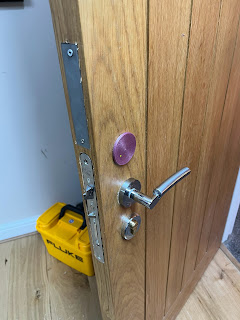 I am pleased to say I finally have the locks sorted at home.

The underlying system is in use at the office and a number of other places, including a hackspace (whose feedback has been great), but as anyone that does software knows it really helps to actually be a user as well. I had the previous system at my previous house in Bracknell. But now in Wales, I wanted the new system as well. I like the system I have made, and using means I can more easily spot the improvements that are needed.

Several small tweaks over the last couple of months as installed. The locksmith has managed a reasonable job of this and coped with my wiring in the door quite well. The controller boards have got smaller and better over time.

It is a very different set up for domestic than for office, and that has been a challenge. The Abloy EL560 work well for this. We don't want "break glass" boxes and exit buttons, so needed some creative solutions to make it "wife approved" and secure at the same time.

My daughter, who is visiting this week, is the first person to have her door access card set up using multiple separate AIDs to allow use at the house here and the office in Bracknell, along with my grandson. The 8k DESFire cards allow this to work well with separate AIDs for each site to work independently.

Of course, said grandson, being far too inquisitive, especially near a hot soldering iron, is why my office door at home is currently default locked. Strangely enough this has led to an improvement today on reporting unauthorised access attempts. It reports all sorts of failures, bad fobs, even access outside time period, but straight up valid card that is "these are not the doors to which you have access, [waves hand]" was not flagged as obviously, and is now. Obviously he did not get access, but now, if he tries again, I get emails, and the teletype will go mental, and so on. LOL.

I should be doing another office soon as well, as a prototype. I really hope to be selling these soon - once component shortages are over (ha!). We'll put the modules on Amazon I expect.