This is, of course, a difficult post, but I have started it whilst things are fresh in my memory. I have published personal things before, I know. This time I had to check with both my brothers to make sure they are happy with this post. Thank you both. This is about my father. It is about what happened this week at the end of October 2022.

He was 85, and struggled a bit with mobility, but we were not really expecting anything to happen, until one day he was short of breath, and taken to hospital.

This was a trying week. He was diagnosed with bilateral pneumonia, but antibiotics were not helping much. After a while alternative antibiotics were tried. There was some improvement, but slight. They eventually decided it might be some sort of fibrosis in his lungs and steroids may be in order.

The whole week he was serious, but stable. He was tired, fed up, stuck in bed, but mostly alert. They had him on oxygen and carefully monitoring his stats. We did try and cheer him up with pictures and videos of the great grand kids and I think he really appreciated that. He had radio on his phone too, and us visiting. Even so, it was basically a nuisance for him... 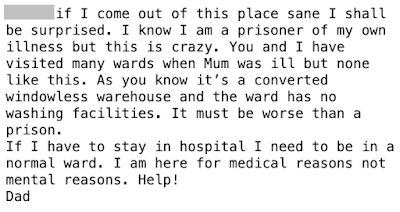 Some of the doctors were a bit doom and gloom, some less so, as I said, he was stable. If they were to find the right treatment he should (albeit slowly) get better.

One of the things I did not really appreciate is they make a plan for what may happen if he gets worse. They decided, due to age and health, that he would not survive intubation/respirator. This is pretty big, as it also means no point in him being transferred to ICU, as that is what would happen. So he stayed on an acute medial ward, and then an acute respiratory ward.

It was worrying, but as I say, he was stable, and there was hope. Whilst he was alert, and whist he was annoyed at being stuck there, there was clearly hope. He just needs to start getting better - get on the right medication. It would take some time, but there was hope.

Then on Wednesday evening, my brother, who had dilligently been with him most of each day, all week, tested COVID +ve. It seems he probably got it from the hospital, though they would not confirm that, but he was not allowed to visit any more. Myself and my other brother had also visited, but not been there as long (much longer journey to get there). We were still COVID -ve. We had all been testing before visiting, obviously. We had our boosters as well. At least my dad did not have COVID...

Then, while my other brother visited him on Friday, he tested COVID +ve (my father, not my brother), and that was seriously an "oh fuck" moment. Someone with serious respiratory problems is not going to survive COVID, and we all knew this, and that was scary. That was the moment I realised things would not end well. That annoyed the hell out of me.

That night, we got a call from the hospital around 23:00, he is not well. I rushed to the hospital, and so did my brother (the one without COVID), and we arrived at the same time around midnight. I'd like to thank my wife for driving me - she has been wonderful throughout this.

This is the bit that really gets to me. He was bad, blood oxygen low 80%, heart rate 200+, alarms constantly - myself and my brother taking turns to kill the alarms as it annoyed him. He had trouble breathing, and talking. He was very keen to make sure we were all OK, and the family all OK, and all was well. That alone was scary. We reassured him as best we could. We got our other brother on video call as well. It was stressful.

This was basically the point that, normally, he would have gone to ICU, but because of the care plan that was not an option. They knew he was just getting worse. They knew they could do nothing.

After a couple of hours he asked us to leave, he insisted we leave, so he could "get some sleep". I understand from a relative that works in a care home, that this is not uncommon. It was bad for him, but he did not want it to be bad for us. He knew exactly what was happening. It was not obvious to us at the time, which is probably just as well.

No sooner had we got home, we had the call that he had died at 3am. I got no sleep obviously.

He had spent hours, gradually getting worse, and knowing that nothing could be done. It was "a nightmare" as he himself said. This was someone quite alert, and awake, and slowly dying. It is so unfair.

I'm glad we were there, to reassure him, and in a way I am glad he sent us away as well.

Things changed from my father being old, and not in the best of health, but well enough - to being dead, in just a week. But it was this last few hours that were the most cruel for him, and for us, as hope slowly faded away.

The following few days have been a bit of a rollercoaster of emotions. Even so, things to sort out, paperwork, funeral arrangements, letting people know. Lots of "busy" work for us to do. It is so easy to think "oh, dad would like to see that picture", etc, even just for a moment. We don't have things "not said", or things "not done", thankfully. But there is a hole. It will take time.

Whilst, obviously, even without COVID, there was a good chance of things going badly, and we knew that, but COVID was the final nail in the coffin, so to speak. It was also the primary cause of death on the death certificate. Even though my brother is getting over it, as so many people do, there are those that will not, and those they leave behind. We all just need to be careful.

Of course, I'd love to do more of a tribute to my dad, and I hope to in the future. This was about the sad times, so next time we can do something about the good times.