I have been using JLCPCB to make PCBs for a while. This is for some of the smaller PCB projects at A&A (here), rather than the big projects we do for FireBrick. It means I am learning a lot.

This month I decided to try and have some "assembled" PCBs done. They have a quite nice ordering page allowing you to view the assembled board. This is important as it seems components have no standard for the reference point, nor rotation, and it varies from PCB manufacturer to PCB manufacturer. The tool I found for KiCad is excellent (here), but I did have to make from the GitHub page, rather than using the library/plug-in manager, as that was out of date. Importantly it allows me to add "offset" and "rotation" adjustments needed for placement of parts. That way I can make working production files in one click, which is amazing.

The big challenge in updating various designs was finding parts - the parts they have available readily, without ordering in, are all very similar to what I am using, but often I have to hunt down the right part number. In one case I found that an inductor was not available in the same package, only to find it was if I did not add a part number. Somehow their search found it even though I failed to. The bigger annoyance was the RGB LED I am using, which is low enough voltage to work from 3.3V. They had a load that are the same footprint even but not the low power and low voltage. I ended up using a different part, different footprint, and even sideways mounting, meaning changes to layout, albeit minor.

I still have to work out how to handle some missing parts - the SCD41, for example, around £30, but they (a) have no stock, and (b) list as $150. So that would not be fitted, and I would have to fit. I am wondering if I can put on the soldered pads with some flux and run through the oven I have. I'll have to test that.

However, for the first board to test the process I ordered the simple Shelly Tasmotizer (here). It does not have a processor, but does have two hand soldered connectors, which was also a good test. They ended up costing £19+VAT each, for a 10 off run, including shipping and assembly and parts. They get a lot cheaper if you order more, of course.

They arrived, and, well, just work. They look really neat. I am impressed. 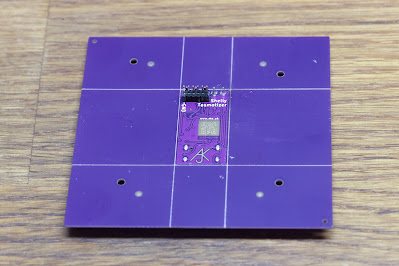 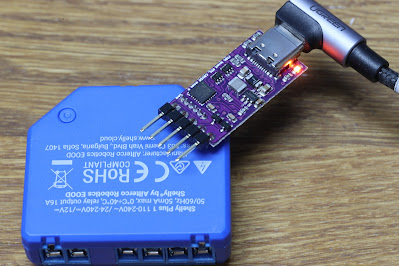