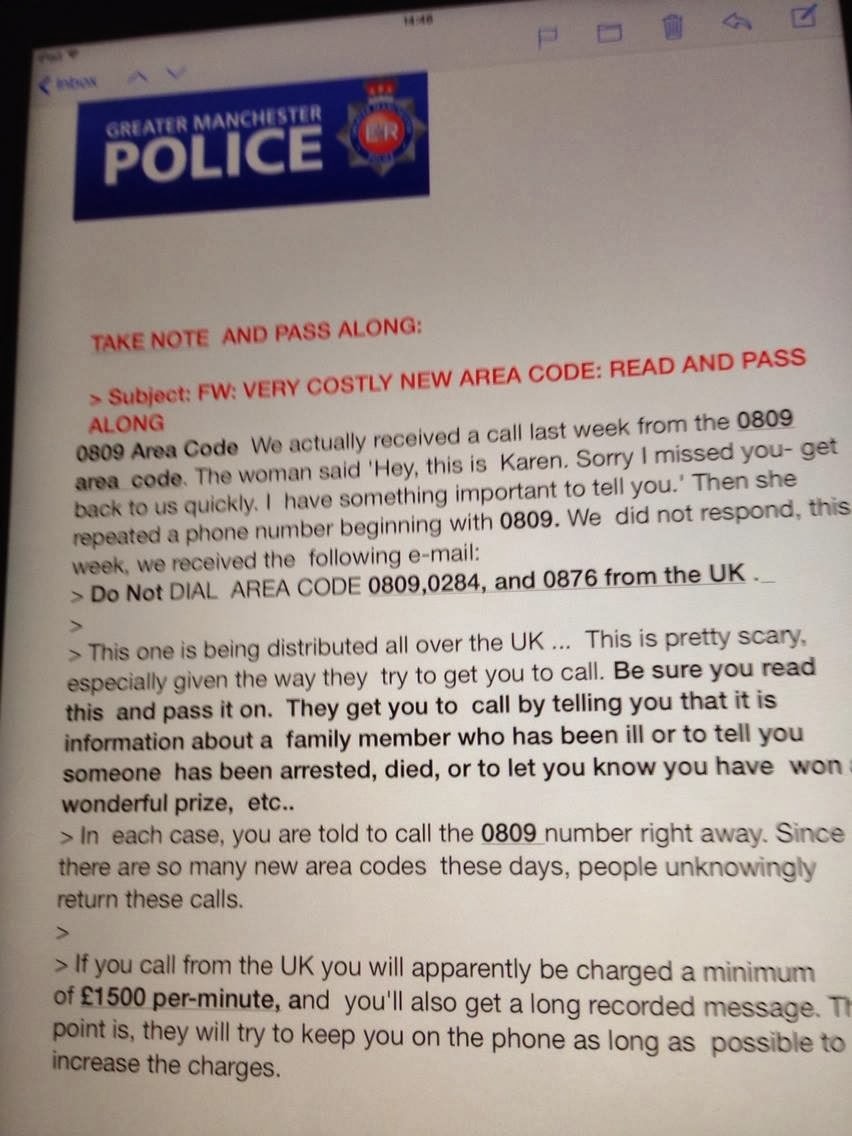 If this picture is to be believed then it would seem that Greater Manchester Police (famous for thinking 3D printer parts were a gun) are now attempting to discredit the homes and businesses of people in Northern Ireland. In particular those with telephone numbers in Banbridge, Rostrevor, Kircubbin, Newcastle, and Downpatrick.

Update: This is more serious than I thought. GMP posted this hoax on their facebook page on 22nd Jan and had not edited or removed the post in spite of many others pointing out the errors until I tweeted. Deleted 14th Feb.

Update: Questions have been raised as to whether that facebook page is real. It is linked to from a gmp.police.uk web page, so it is real.

The police know that OFCOM allocate all new area codes and could simply have asked them to confirm this story if they were unsure. I am very disappointed, even cross, that they should spread this hoax. It is even worse that this does not just cover fake (i.e. unallocated) area codes but also real phone numbers of real homes and businesses that might want people to call them.

What also disappoints me is that I have friends and relatives that have posted this on facebook as if it was real. I don't expect them to know the UK National Dialling Plan but the idea that any call could cost £1500/minute should have rung alarm bells. It is not as if they do not have something they could ask!

The letter claims that there is a scam where people are asked to call back to numbers starting 0809, 0876 or 0284 and that these new area codes cost £1500/minute to call.

The UK does now have something of a plan for numbering. Yes, it was confusing in the past, but it is a lot more logical now.

0809 and 0876 have not been allocated. There are no numbers starting with these area codes (they are not actually "area codes" as they have no area they cover). If ever they were allocated then 0809 would be a freephone number (i.e. free from a landline) to fit in with the existing scheme.

Calls to 028 numbers are normal geographic call rate. i.e. The same as calling any number starting 01, 02 or 03. They are included in normal calling packages the same as other geographic numbers. They are not expensive to call.

Update: Reading the GMP facebook post it is worse that I thought - they go on to suggest that when your phone company charges you they could then wash their hands of this and leave you arguing with a foreign telco!. That is not how it works in the UK (and surprised if that was even the case in the US) - you have a contract with your telco and and billing would be a matter of dispute between you and your telco. This is just more fear, uncertainly and doubt being spread by GMP causing unnecessary concern and distress and damaging their own credibility. We trust these people to enforce the law in Manchester do we?

Where does this crap come from?

According to snopes this all stems from scams in the US many years ago. In the US they have numbering that is 3 digit area code and 7 digit number. The problem is that there are a handful of country codes that are within the US prefix and so in the US they look like normal US numbers. This is much like the fact that in the UK there are normal looking 07 mobile numbers that are actually for Manx which is not even in the UK, and hence a bit more expensive to call.

So, county codes +1809 (Dominion Republic), +1876 (Jamaica) and +1284 (Biritish Virgin Isles), look to Americans like normal US phone numbers in area codes 809, 876 and 284. They cost more to call, and it seems that at some point there were some scams where this extra call cost was paid out somewhere along the way just like a premium rate number. Because of this the warnings were spread in the US.

This is somewhat out of date anyway in that the scams are less common in this form (now they are often other countries and more often compromised SIP switches than social engineering a call back). The costs have also gone down. E.g. We (A&A) charge 3½p/min (9p/min for calls to mobiles in that country) for Dominion Republic, 6¼p/min (14½p/min for mobiles) for Jamaica, and 9¾p/min (16¼p/min for mobiles) for British Virgin Isles. Compared to calls to normal US numbers where we charge 2p/min that is expensive, but a far cry from £1500/minute as claimed!

Why anyone would translate this outdated US scam warning to UK numbering is beyond me. In the UK such numbers would not look like normal UK numbers but would obviously be international (e.g. 001809...) and presumed to be expensive. The scam would not work like this in the UK even if the scam was still happening.

I am shocked that GMP are spreading this hoax, and even more shocked that weeks after they were corrected they have not retracted it or apologised. That is just appalling.

Update: I have emailed the IPCC about GMP to see if they take it seriously.
Update: 14th Feb, after tweeting GMP they finally removed the post on 14th Feb.
at February 13, 2014