LED there be light!

We are changing the lighting in our main office to new LED lighting panels.

To be fair, the original reason for even considering this was the geekiness of it. Kev is fitting out a workshop and, as he does, he researched lighting options and came up with LED lights and told me.

Now, I think they look cool, futuristic, and so on, but even I am not going to splash out over £1000 on new lighting without it being sensible, so I started looking in to the costs and savings.

The first step was working out how many new lights we need. Can I swap one for one? So we installed one light initially to assess the results. We are quite pleased - the new lights appear, subjectively, at least as bright as the old lights, and maybe even brighter. They are also white rather than yellow.

Is it worth it?

Working out the payback on this is not as simple as it sounds.

But then there are a number of other factors. Simple regular changing of old fluorescent tubes, and starters, and such, have costs for the parts and the staff time fitting them.

Of course, it is never as simple as it sounds. For some of the year we are heating the office, so reducing the power coming in to lights means a corresponding increase in power for heating. In fact, we use modern air-con for heating which means more that 100% efficiency from electrical power at the office converted in to heat. The waste from lights is merely 100% efficient. So we save some money by heating using air-con rather than heating using waste from lighting.

For a lot of the year, with an office full of people and computers, the air-con is cooling the office. Removing a heat source means correspondingly less cooling, and so less power used by the air-con.

This means we can multiply the power saving by some amount - the exact amount is not that easy to work out, but it could easily be another 50%.

Of course, the original calculations are based on the stated power ratings. The LED panels are 45W at DC and the mains power supply unit will have some efficiency less than 100%. On the other side, the fluorescent tubes will have reduced efficiency as they age, and additional components meaning it will use more than the rating on the actual tubes. It will be interesting to do an actual power test on these, which I may do later this week.

The people selling the LED panels do try to show some of the savings, but also seem to factor in to their examples an HMRC low energy scheme. Reading the scheme, it says it will save money. Yet it appears to simply be a 100% write down of capital on such lighting in first year. Personally I would think repairs and renewals for replacing light fittings would be first year write down anyway, but I leave such things to the accountants. The scheme, if it has any effect at all, appears to simply change which year tax is paid and not how much is paid meaning no actual savings at all. Maybe I have missed something.

That said, it is likely that overall the savings will result in a payback in 1 to 2 years, plus the lights look way cooler which is what really matters :-)

This means removing the existing fluorescent fittings and replacing with the new LED fitting.

Removing the old fittings is a faff. For a start, you want to remove the tubes. This is a fiddle at the best of times, but if you don't do this first then you risk breaking them when removing the fitting, and having to clear up glass, and powder, and avoid breathing any mercury vapour. So don't do that.

Then you have to remove the actual fitting, push up, move to one side and drop down. Of course the wiring in the fitting will not allow you to lower the fitting far. So you have to take the front off it so you can get to the connectors (screw terminals). The front is attached by an earth lead, so that is a pain too. With two people, one holding the fitting and on on the ladder, you can manage. Of course the screw terminals are seized up, and you end up cutting the wires :-)

Finally, we chose some simple in-line wiring connectors. Fitting one of them to the wiring in the ceiling space was easy. You can fit the plug to the power supply safely on the ground level.

Of course, you will need a suspended ceiling T bar to change the double slot to two single slots. These are a bit of a fiddle, but not too hard.

The new panel goes in just like a normal ceiling tile. Push up at an angle and drop in place. It is a tad thicker and heavier but easy to lift with one hand if needed. It just slots in. You connect the power supply up, and pop a new ceiling tile in the other space.

Just properly dispose of the old fittings and tubes, and job done.

I got it down to under 10 minutes per light. 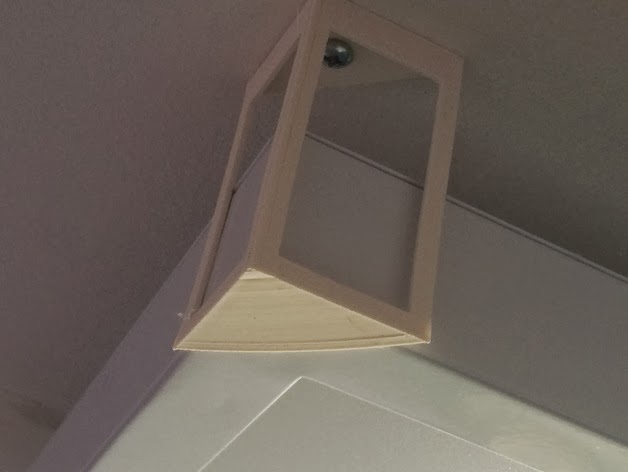 Well, I was so impressed, I decided to do my study at home. The issue with that is I do not have a suspended ceiling. This meant I needed to find a way to fit these panels on a normal ceiling.

The answer, of course, a 3D printed bracket (see thingiverse for the ones I made). These fit to the ceiling, and allow the panel to be suspended from them whilst leaving room between the panel and the ceiling for the power supply and in-line connector.

Of course, in my study, I am more than happy with the lights. Nice and bright.

My son had to follow suit, and got new lights because (conveniently) a light fitting had just broken in his flat. So, in his games room (living room) he needed a new fitting. 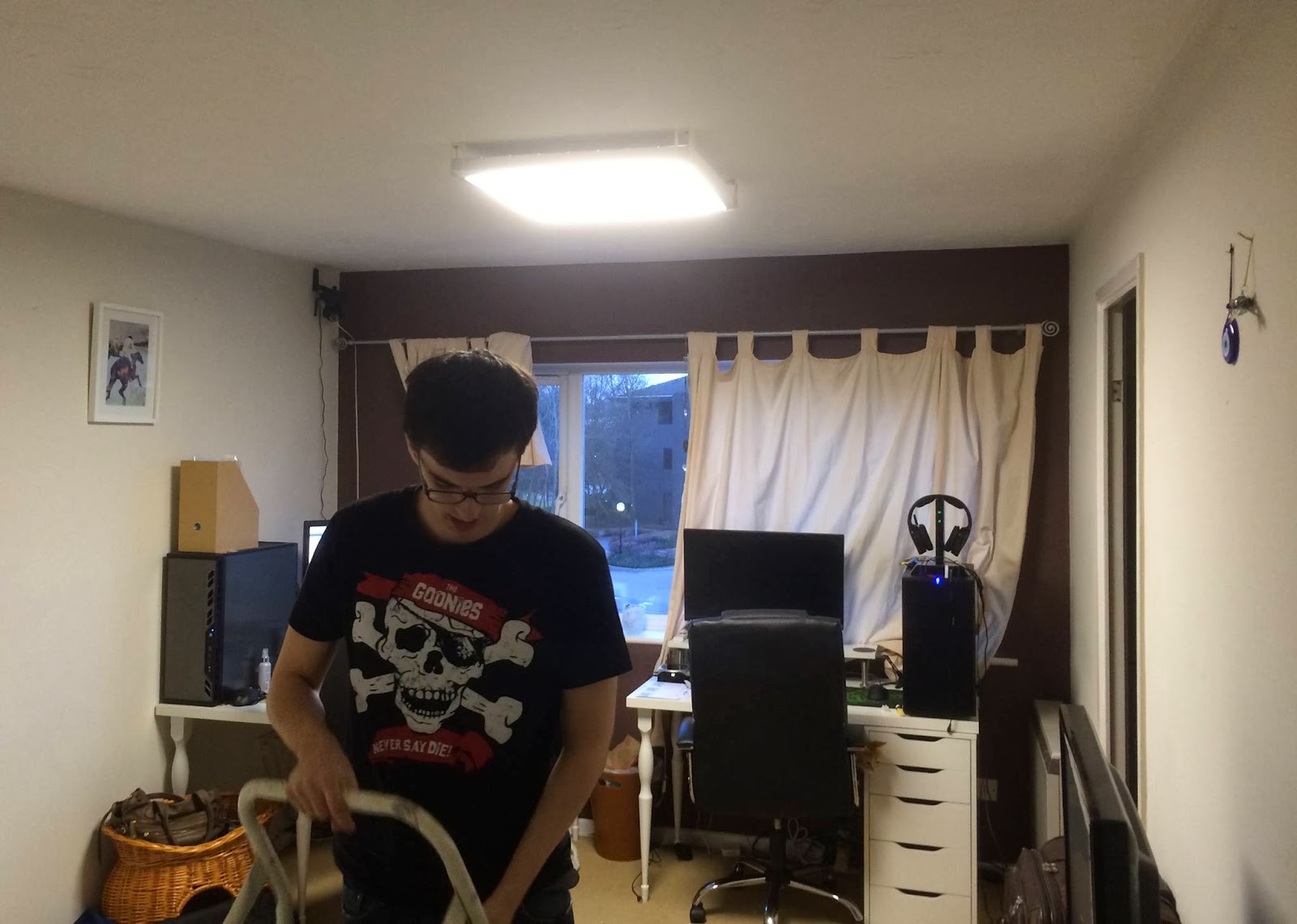 Apparently, according to Julia, it is way too bright! You can't win, can you?

The good news is that a slightly more expensive power supply works with mains dimmers to allow the light to be dimmed. So, we have one on order. That should keep her happy.

The cost saving is obviously an up side, and if you like, the green impact that has. They also don't appear to flicker, of if they do it is far less obvious. The colour of the light is much better (though you can choose, e.g. daylight white, etc). If you want more light in a room, they are a good way to do it without more cost.

The actual panels we got are IP66 rated! That means dust proof and high pressure water jet proof. One short of actually immersion in water (so don't light your swimming pool with them), but obviously not an issue in a bathroom!

I think we have only seen one possible down side so far - we changed the lights in the toilets. There was not the obvious cost saving, but the lights in there were an 80W big spotlight in the middle of the room and always seemed very dim, annoyingly so. Apparently these bulbs need replacing quite often and are not cheap, so probably a cost saving just in replacement bulbs and time. The room is now very light, brilliant even. It does, however, show how well a job the cleaners do, and that is not so impressive. In the long run, this is not a down side at all, just more work for someone to keep the room clean!

Well worth it I think. Not that expensive. They look good, and ultimately save money. Very impressed.

I think, a couple of years ago, LED lighting was not there. Now, all of a sudden, it is. It has overtaken the fluorescent lighting and an obvious choice now.

We purchased from a company called TLC Direct. They are quick and efficient.
at February 02, 2014