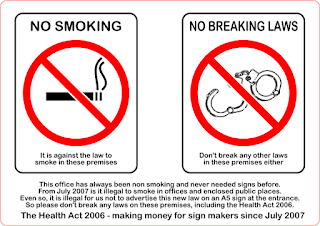 I still think it is daft making the requirement to have a sign, to be honest. That is something anyone managing a building (and with an obligation to stop smokers) would put up anyway. But the new regulation is simple, and does not dictate the stupid different formats - well, at least in England - I cannot see for sure that it has been sorted in Scotland, Wales, or Northern Ireland.
at July 09, 2015