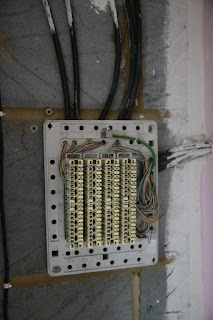 I don't recall the date, but when we first moved in to this house I personally installed some cabling.

Internet back then was dial-up which I had just managed to progress to ISDN.

I installed good quality 5 pair external jelly filled telephone cable to every room in the house with a double phone socket initially. This involved a lot of crawling through the loft, drilling holes, and hammering in cable clips whilst at the top of a ladder. It was hard work.

I neatly terminated all of the pairs on a 40 way DP, so 8 rooms each with 5 pairs. It was very tidy.

My kids all had an analogue phones with their own personal direct phone numbers in their rooms. The numbers are still used by some of them now, but VoIP and Mobile connected.

Over the years the use of the pairs ended up being 10baseT and even 100baseT as well as analogue telephone. It was not until much more recently that I ran actual cat5 from the loft down to every room along with multiple coax for satellite TV which is what we use now.

Much of the original wiring has been taken down off the walls, and all of the old sockets removed, but until today that DP still remained on my garage wall - neatly terminating all 40 pairs but connecting them to nowhere.

Now, I am tidying up, clearing everything out of the garage I don't need, and removing all of the old cabling, so it has finally been removed. I have also ripped out the old ISDN sockets and the old DSL/phone sockets. 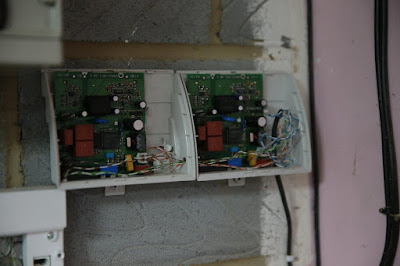 All ready for the builders to start, even if that is delayed now to next week.
at August 26, 2015