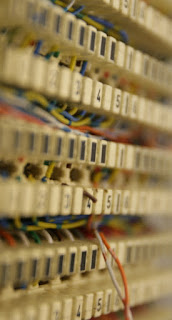 I go on about SFI charges, but the latest scam is BT charging "Time Related Charges" for work (mainly on FTTC line faults).

We had a customer with a fault on an FTTC line, constantly dropping, many times a day. We had, of course, replaced all of the equipment and had it connected to the master socket test port (so no extension wiring), so proving the issue was with BT.

BT's tests said: "Impairment in copper joint detected most likely in local network. Please continue to submit a trouble report" so we reported a fault. BT then asked us to "arrange an appointment" (not, as is more usual, a case of saying there is nothing wrong and "offering" an SFI service).

So, at BT's request, we arranged an appointment, and the engineer went out. The line was off for around an hour while he worked on it. Now it is all working - no more drops. Thank you BT.

To our surprise we now have a bill from BT for "Time Related Charges" for this fault report, as BT had closed it as "Customers Equipment, Error or Misoperation;Fault found on customer sited non BT maintained equipment". Somewhat odd as BT's own tests said to report a fault, and we had not approved any "Time Related Charges", and we had already eliminated all customer equipment (the same equipment still in use and working). In fact it was BT who asked us to report a fault and BT who asked us for an appointment. They took this upon themselves all the way.

This is, in itself, typical of the hassle we have every day from BT.

Except this time BT have charged for 350 hours of time related charges on the fault. The entire fault report end to end was only 7 days (168 hours), most of which was waiting for BT to actually go out and do something. From point of no return at start of day, to closed job, was under 7 hours. They would have had to have had 50 engineers working for that whole 7 hour period to justify this charge!

The charge for this one fault repair?

And BT are actually meant to be double checking our bills before we get them because of the number of incorrect charges. Odd for that one to have slipped through. Well done BT.

Needless to say that this will be added to the disputes!

P.S. It is probably worth explaining one of the underlying issues here. TRCs are for engineering work. Now, either the engineer did work on BT's side of the NTE (to fix a fault), in which case we do not have to pay, or they did work on the customers side of the NTE, in which case we did not request or agree the work, so again, we do not have to pay. Unless we specifically order work to be done, and pre-agree a TRC budget, and it is not work to fix a BT fault, we should never get a TRC charge whether it is £252 or £25,200.