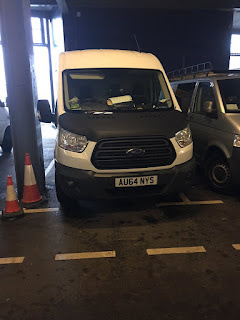 I was not keen as last time we went to IKEA was to Wembley and the whole trip was 5 hours due to some horrid traffic and weather.

This time we went to Southampton. Slightly longer forecast journey time of a little over an hour, but it did not allow for the second hour taken getting from 0.9 miles to 0 miles which was essentially the queue to get in to car parks in West Quay.

Finally in to the car park we could go to level 0 or higher levels, and there were numbers of spaces. I do not recall the exact numbers but both in the 20's I think. I do recall it was a close choice, and so we went in to level 0.

We immediately realise there were no spaces. Well, actually, there was one that was half blocked by a van, two spaces for car chargers, and two that were coned off for no apparent reason. Even the disabled and pushchair spaces were occupied. We went around and around for 10 minutes or so after a very long journey.

I was met with some abuse by someone that was expecting a van to park, advising that this space was for a van. That there was nowhere else for a van to park(?), and we had to move on. Now, obviously I was arguing, no way if I was driving would I not have simply parked in the un-marked, un-restricted parking space for which I had been waiting over 10 minutes. Sadly, Sandra drove off. It seems she thought clamping cars was still legal. We found a space a few minutes later, but the whole trip was marred by the experience.

I called IKEA, and still have not had a proper explanation of why these unmarked spaces are reserved for vans.

I'd like an official answer - if these are reserved spaces, why are they not marked as such?

If we had parked, what would have happened? I am told we would be asked to move, so what if we had said no, or rather "yes, when we have finished shopping"? Clamping is not legal. Parking in marked bays is within the terms and conditions. I cannot see that legally there could have been any recourse at all.

What makes that van, AU64 NYS, special? Why do they have a right to park before me and my wife exactly? IKEA, I await your reply. I appreciate "car size" is not a protected discriminatory factor, but I do feel I have a right to an answer on this.

I also want to know why your signs lie about the number of spaces available.