Earlier this week Barclays blocked my debit card. You wonder what horribly suspicious activity prompted this? Well, I had the audacity to try and top up my Monzo card! I have been frequently topping up my Monzo card since I got it in April, indeed, that is almost all I have done with my Barclays card since then (except Costco, who don't yet take Monzo). And yes, I had done so a few times since the name change. How the hell was that suspicious?

Then they texted me saying they would text from some short code number and ask me to reply. Well, sorry, but I can't text short codes. Eventually, much later in the day I got a call and had to go through DTMF hell to convince them the transaction was fine. Pain in the arse.

Today however I noticed I was mysteriously £13k overdrawn! I had checked earlier today and was fine, so something was up and I had caught it within hours. The phone app and on-line banking did not say why.

WHY THE HELL CAN THEY NOT TELL ME THE PENDING TRANSACTIONS!!!

I went in to the branch and asked, and they could see that some Danish Auction house had authorised over £13k as a "recurring transaction".

We used to do cards for broadband some years ago, so I have some clue on the retail side of this, and as I recall, a recurring transaction only needs the card number, not the expiry to CVV code. This is so that regular card transactions don't fail on renewal of the card itself.

This is clearly suspicious. For a start, why would an auction house need to charge on a "recurring transaction" basis at all, and also why would anyone charge so much on a "recurring transaction" basis anywhere. Had I used the card number, expiry, CVV, and verified by visa for an on-line purchase, then fine - I would not want it blocked - but this was not me!

It was not an on-line transaction, it was a "recurring transaction" (so probably just card number), to a foreign company that has never ever charged my card before, and for a large amount.

What twisted logic do the banks use that does not make that suspicious?

Then more issues - I am told that they cannot do anything until it appears on my statement. Well, I have told a Barclays representative that the transaction was not me - really that is all I should have to do. It is not me that has been defrauded here, it is the bank. I am just a bystander here and I have done my bit. However, they are insisting that I spend yet more of my time contacting them again once it appears on the statement.

Moreover, when it was the Monzo card I was able to answer their questions that day, and so presumably could have reported the transaction as fraudulent. So why can I not do so for this one?

As a retailer I would want to know right away, so why not allow me to report this now so they can be told?

I am not 100% sure what was asked by the person on the phone (that the bank tellers was talking to) but I suspect they wanted me to put money in the account to cover this. She had clearly got a good impression of my annoyance and explained that I would not be prepared to do that. Bloody cheek.

Then she cancelled my card. This seems pointless if all that was used is my card number. My new card is as likely to be abused in this way to defraud the bank as much as this one. I have not lost the card, which is what she reported it as (so she made a fraudulent statement to her own bank!). Indeed, if someone wanted to have a go at me, they could just work out my next card number but as a recurring transaction they may not even have to do that for it to go through in just the same way. (Update: Barclays have stopped doing that and new card is very different number).

So cancelling my card just causes me more inconvenience.

P.S. The Danish auction house are actually engaging with me more than my own bank!

P.P.S. In an effort to be constructive, after a lot of disagreement with Barclays on twitter today. What I think should happen is simple. I should (a) be able to see what is authorised but not yet on statement on app and web site; (b) I should be able to select and say "not me", perhaps with some dire warnings of being really sure and perhaps depending on levels of checks (e.g. chip&pin used?); (c) that should be the end of it as far a sI am concerned. I appreciate that Barclays may have to follow established rules on how to handle the issue, and dispute via Visa/Mastercard, and so on. But basically, that should all be hidden from me - not impacting my balance and not even shown on my statement. Only if merchant comes back with evidence it was really me should the bank ever need to contact me on the matter again. This could be done - the bank could do this all internally with no change to their processes when dealing with merchants or card processors. If people claim transactions are not them when they turn out to be, maybe the system then holds their balance at authorised until resolved in future as a black mark, but generally, the above system would be ideal. I could even live with there being an admin fee if I mistakenly claimed a transaction was not me.

The auction house cannot work it out - it was in DKK so not sure exact amount, and nothing with a card ending with the digits on my card. Odd. They did thank me for letting them know. 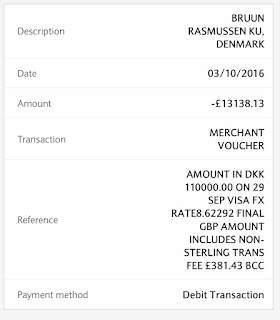 Has shown on my statement finally, and so I am on to Barclays now.

I am still on call with Barclays, and it has disappeared off my statement now - good job I took a screen shot. I did not know they were allowed to make statement items vanish like that - I would have expected a credit to appear to cancel it. That surely has to be bad banking practice to do that. Oh, and it has re-appeared!

Interesting, it was my old card used, not this one! A card that is invalid.

So they have admitted that it was a mistake but still want me to faff with a "claim". I have explained on my recorded call that I will do so for my consultancy fee as I am helping them out where they have been defrauded.

But let's be clear here - a frequent top up to Monzo is flagged as suspicious, but a "recurring transaction"; from somewhere I have never purchased before; for a large amount; from a foreign merchant; using an invalid old card number; is just authorised with no problem. To be clear here, this was not just a transaction that was submitted without authorisation - it was authorised by the bank. Somehow that is not suspicious.

They have credited the charge at last. Paperwork just arrived - talks of experiencing fraud being worrying, and discusses "my claim".

Wow, Barclays actually retweeted my criticism of them!

They have taken the money out of my account again - I am fuming.

I got the business banking relationship manager on the case and now, 14:30, the account has been credited again. Seems they did not get the paperwork! They could have called, texted, emailed, sent a secure message, or written to let me know they were still waiting - but no, they just took £13k with no warning or explanation. So well done Ian for sorting it.
at September 29, 2016

Email ThisBlogThis!Share to TwitterShare to FacebookShare to Pinterest
Labels: BANKING