There have been some interesting stories of Bitcoin being declared a legal currency by some legislators / courts around the world. Wikipedia has an interesting page on the matter.

One of the classic issues though, if Bitcoin is to be treated as a legal currency, and the legal burdens that can imposed, is how you define it. You cannot have the law say "bitcoin" as there are already many other similar digital currencies like Bitcoin, so you need to be more general.

The danger with a more general definition is including something like World of Warcraft Gold in the definition, or points in any other sort of game. Some games have in-game currency which is directly bought and sold (exchanged) for "real" money and used to buy things in game. It could be used to launder money - buying virtual currency, passing it in game, and selling it, so legislators may consider it worthy of the same legal controls.

But in-game money, like WoW Gold, does not follow most of the rules of "real" currency. Making it subject to the legal controls of "real" currency would be a problem. In the game, vendors sell things for WoW Gold and that WoW Gold does not go to the vendor account or a "Blizzard account", it just goes. Similarly there are things in game the provide WoW Gold or goods that vendors will buy for WoW Gold and again that gold is just created by the game, it is just a number. Overall the game has some controls, and so there is an internal market for goods and gold (the action house). But most of the way WoW Gold works in-game would not be allowed if it was deemed a "real" currency, and Blizzard might have to become a formal bank even!

Until recently and buying or selling of WoW Gold for "real" money was not allowed in the terms, but even so there are web sites selling WoW Gold, and they still exist. Players using them could lose their account. But Blizzard actually created a real way to convert money to WoW Gold in the form of a WoW Token. It is purchasable in the UK for £15 and can provider 30 days game play. However, you can also buy and sell WoW Tokens on the auction house, and they currently go for around 68,000 WoW Gold, which is quite a lot. This means there is an exchange rate for WoW Gold in the real world. Blizzard have been cunning, the game rules don't really allow laundering money - one could put money in to buy WoW tokens, but one cannot get money out of the game - you can only sell for WoW Gold or use for game time, so hopefully WoW Gold would be kept out of legal currency legislation.

But it is a fine line for legislators to make a sensible definition.

On a side note, this did mean I could be slightly extravagant, and for two WoW Tokens I managed to buy a vanity mount, one of the most expensive in-game things, a Grand Expedition Yak at 120,000 gold. 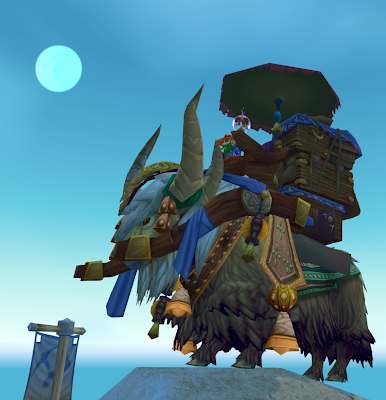