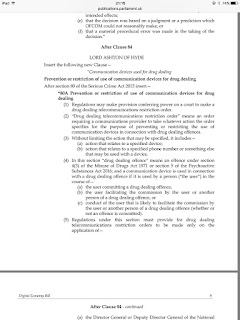 One of the more recent amendments to the Digital Economy Bill proposed the possibility of orders to block use of a device or phone number or something else that may be used with a device if it is, or likely to be used for drug dealing.

There are some problems with this!

Does it make any sense?

This appears to be based on an NCA report that talks of basically telephone ordered drugs. The report talks of people call a long standing and well known (mobile) phone number, and order drugs, then someone gets sent to deliver them. Lots of exploitation involved in various levels, dealers trying to keep at arms length, nasty business.

The proposal seems aimed at disrupting the supply by blocking these numbers. It is not clear that this is an NCA proposal though, so not clear why it had been put forward.

To me that makes no sense. I am not in law enforcement, and do not know how these things work, but surely if you have evidence of drug dealing, arrest someone. If you know the number is used to order drugs, get an intercept, record calls for evidence, physically locate the phone and arrest someone? One comment I got to this is that when you take one person out the number just moves to someone else - well that sounds perfect as you can just repeat the process until the number becomes a poison chalice that no dealer would touch - the same result as blocking the number but also arresting several people along the way.

But assuming I don't know what I am talking about, and the seemingly lazy approach of just blocking the number is sensible somehow, surely all you are doing is driving the dealers to use more covert and secure communications? Phone numbers are so last millennium! For a start the dealer could get a non UK mobile, which is just as easy to use but harder to get blocked. They could use a non UK number that forwards to a UK mobile, the non UK number then not even being on a roaming phone, and the final target being changeable as needed - again hard to block as has to be blocked at all calling telcos, not just the receiving telco.

But forget "phone numbers" for a moment, what of "iMessage moredrugs@example.com" as the instruction you give. Now you have communications that are end to end encrypted, and even the fact of the communication is in the hands of a foreign company. The dealers have just dropped under the radar massively if they do that, and there are many other common platforms for such communication.

So it seems nonsensical and very short sighted to even consider this as a means to tackle the problems, even a lazy means.

What about due process?

Another big concern I have here is that such action, which is clearly harming or punishing someone (the phone user), is done without any actual evidence or conviction of a crime. Indeed, the amendment covers cases where no crime is even committed but the conduct by someone is likely to mean a device is could be used to commit a (drug) crime.

This is a worrying trend that bypasses a proper due process. We seem to have too many of these. It could also be abused - if someone put our business number on some toilet walls saying call for drugs, then we could be blocked, even though no crime committed?

The other problem I see is this does not just cover devices (how quaint) and telephone numbers (almost as quaint) but anything else used with the device. This means such orders could block domain names. If someone emailed me offering drugs then could I find my domain name blocked? Would there be notice? Would there be an appeal?

Now this would involve a judge, but even so, this is punishment without charge or conviction, and has much wider scope than simple mobile phones.

What should we do?

We need to stop trying to find short term shortcuts and actually catch the criminals. We also need to fix the social issues that create the environment for such criminals to thrive in the first place. But all of that is a lot more work than just making phone blocking orders...