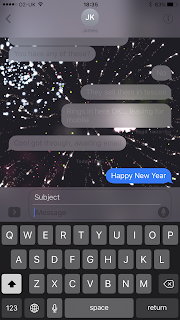 I sort of felt that I should post something but now I come to, I am not sure what to say.

My new year's resolution is the same as last year, 5120x2880, which is the resolution of the nice 5k Mac I use :-) I don't really make traditional "resolutions", never have done. If I set my mind to something there is no reason to wait for a new year. Like anyone else getting older, I hope to stay reasonably healthy - but that has been slightly thwarted by nearly two weeks of rotten cold / cough. I really think I am getting over that now, I hope so, so the year should start on a good footing.

I have a great family, and that moves on whether the year is ending or not. Another grandchild on the way - which is great news, but makes me feel even older.

The company (A&A) is doing well - the upgrades we have done over the last year have helped make sure we keep up with ever increasing usage and manage to offer what I really feel are good value packages. Yet more to invest in the coming year with a lot more 10Gb/s stuff happening but happy we can afford to make that investment - I do feel we have the balance right. The company is 20 later this year so we should do something for that!

Politics in in the UK is nearly as mental as the US. OK UK politics is a tad less likely to be world wide armageddon, but still crazy. Our illustrious leader, May, is still suggesting radical moves, like abandoning Human Rights, which is just plain scary. We have DE Bill to contend with, which is also scary. And the IP Act, with all its secret orders, should be challenging.

I did one fun thing last year - I learned a new skill and was tested and approved - drone flying. Not actually done any commercially yet, but it was actually quite interesting just learning something completely new and different at my age. Even so, law on that is probably changing soon as well.

I do plan to try and come up with some sort of holiday plan this year. Oddly things are getting a tad strange for holidays - it used to be like one family holiday a year, but with the kids having their own family now things get more complex. A holiday with my with darling wife, obviously, but probably also a holiday with some of my mates which I did for first time last year (LA and Vegas). We'll see how that goes and what I can afford.

It should go without saying, but always seems necessary for so many people to say, so I wish everyone a Happy New Year. Wishing does not really do anything (much like praying) but saying it does make people feel I am a nice person (which I am, obviously). Maybe that is the cold and/or alcohol talking. Even so, I do hope everyone has a good year...

My latest clever trick is that hard pressing the "send" on iMessage means you can send with bubbles and screens, like "fireworks" (saying "Happy New Year" sends with fireworks automatically). Yes, by so much, I am not the first to know that. But that is what the image is.

I have a busy week ahead, change freeze over, we have a new FireBrick release, and upgrades for that, and loads of other things now that I am allowed to tinker. Still hoping, after this cold, I have my mojo back. Right now I have a temperature, I think, and have had to turn on air-con in the man-cave. Wish me luck (as if wishing worked), ta.
Posted by RevK at 18:57:00