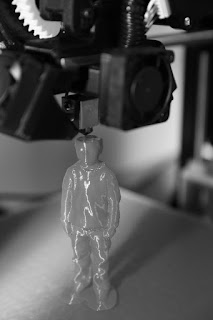 We (A&A) have now got a Lulzbot TAZ 6. It has some differences, and I hope to explain them here. However, overall, I think the TAZ 6 from Lulzbot is actually a good choice and value for money.

A good starting point in any comparison is price, and Makerbot Replicator 2 seems to be listed for around £1500 at the moment. The TAZ 6 I got was a little under £2000, but oddly they are often listed nearer £2500 (inc VAT). The price I paid seemed quite good, and I got it from Amazon. DPD screwed delivery so a working day late.

Unpacking and getting ready

The Makerbot pretty much was complete (though later versions needed some assembly), but the TAZ 6 is not far off. The bed+carriage needed fitting, which was 4 thumb screws, and the extruder needed fitting which was one screw with a (provided) Allen key. It came with a tool kit even. Very simple and easy and very clear instructions. A few connectors needed plugging in along the way, but all simple and obvious. I was originally concerned that the TAZ 6 was more "hobby" style than the "plug and play" style of the Makerbot, but I really cannot fault the packaging and installation instructions much. It really was simple and took maybe 10 minutes from opening the box, if that.

Checking the Internet the layer resolution of the Makerbot can be as good as 50µm, but the software appears to only go down to 100µm. Even at 100µm we found the prints to be "stringy" (fine threads between parts of the print). The TAZ 6 can go down to 50µm but the quality is much the same as 100µm, and very good. My practical tests suggest the quality of the TAZ 6 is at least as good as the Makerbot Replicator 2. As usual it is simply a trade off between quality and speed.

The Makerbot uses 1.75mm PLA, but the TAZ 6 uses 2.85mm PLA, or ABS. The fact it can print ABS is a definite plus point for stronger prints.

The TAZ 6 manages 200mm/s. I am struggling to find the Makerbot spec. It seems similar. We may have to do a race between the two some time soon!

The Makerbot Replicator 2 has a zero Z axis only, bed levelling is a manual process to go through with turning thumb screws. The TAZ 6 has built in levelling. Unlike the Makerbot which means making the bed level, the TAZ 6 measures the bed and builds that in to the X/Y/Z plotting on every print - never a bad print that way. Nice feature.

I was not really that happy with a moving bed - seems to be asking for trouble somehow, but to be honest the TAZ 6 seems fine. Yes the bed and the whole of the print so far moves, but it seems to not break anything, so fair enough. It has the side effect, along with an open frame, of making video of the print process a lot easier.

There is a dual extruder for both of these, not tried either, but that is a key feature for dissolvable supports. More on that when I eventually try that. The open frame of the TAZ 6 could mean no loss of print size though, to be tested.

The Makerbot app is very good, and easy to use, but to be honest the open source Cura used by the TAZ 6 is at least as easy to use! There is nothing really to tell them apart here.

The TAZ 6 lacks maybe on thing. The on device menu should have load and unload filament for totally off line operation. I think it may be possible with movement command. Could be clearer. At present that works well via USB from the Cura app. That is pretty much my only criticism of the TAZ 6 so far!

The only other issue on the TAZ 6 was that when it arrived, probably down to vibration in transit, the two Z axis screws were not aligned meaning I could not do the auto bed levelling. My left/right Z axis was skewed! It was a simple matter of turning one screw a few turns, but the manual did not seem to cover this simple flaw. They could easily improve that.

I prefer the TAZ 6, not much more in price but a lot more in features, and just as easy to use as the Makerbot Replicator 2. Well done Lulzbot.