UBNT/Ubiquiti and iPhone and roaming not working 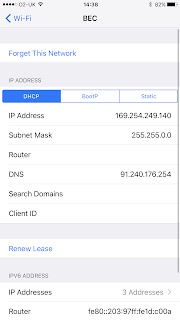 I have posted a few times on this - the issue is plain...

If I sit in the bath in the morning trying to catch up on twitter and FaceBook my iPhone stops working.

This is all about roaming between Access Points on the WiFi, when I roam between APs (I have 3 in the house) I lose connectivity. It is annoying.

This has varied from occasionally to damned annoying, depending on s/w versions. The latest code on the iPhone and Ubiquiti led me to turn off WiFi and read Twitter in the bath on 3G as I kept having to reset the WiFi. That really is the last straw.

Ubiquiti are now talking to me and working on it. Thank you.

We have tried many things, but the last few days I tried turning off the IPv6 on my LAN. Yes, that was strange. Most of what I do uses IPv6. Most of it will fall back to IPv4 (but not all). I have machines (e.g. my main Mac) with fixed IPv6 addresses but router set via RA, so that caused delays on access to all sorts of things. Turning off IPv6 is strange. It is, after all, the current version of IP. I'd be happier turning off IPv4. I have turned it back on now. Phew!

Initially it did not fix anything, but the iPhone still had IPv6 addresses even though RA was off. Looks like my RA code sent "infinite" life on prefixes on removing IPv6 RAs rather than zero - oops. Fixed. But proved RA itself is not the issue, it is the iPhone having IPv6 addresses.

Once it had only IPv4 addresses it worked, and roamed between APs seamlessly with no problems for 2 days! Turned IPv6 back on and the problem came back immediately.

So, is it an iPhone issue or a Ubiquiti issue? Hard to say. I do not know if "roaming between APs" has any "is this IP OK still" logic? Or what? I don't know enough of the protocols.

Many people have said they use Ubiquiti and see no issues. Ubiquiti have said a few people have issues, and they don't understand why. This could be it.

The good news is Ubiquiti are working on it - trying to reproduce the issue. I have offered a FireBrick that will send RAs for them to test. Let us hope this is close to the end of the issue. If it is iPhone, I hope they will raise with Apple.

If we can only solve this, the Ubiquiti are excellent APs at a sensible price.
at January 22, 2017