The alarm project has been pottering on since I installed in my house. I have it working well here and on a bench setup. I have also been working on decoding more stuff such as the newer RF RIO and RF PIRs that you can get. They are fun. I can even tell when there is movement in one of my neighbours house - privacy implications I wonder?

It is all on GitHub now.

However, one thing I also did was wire up the kids' playhouse in the garden.

Yes, that is a kids' playhouse with swings, and slide, and Galaxy Max Reader, and big green exit button, and Galaxy keypad, and small (cabinet/drawer) mag-lock and (large) reed switches. The grandkids love it.

It has been, however, a good test, as I expected it to be. I wanted a platform with a working door that I could test on more accurately than my work bench but not messing up my house alarm and doors to my office here. An alpha test site, if you will. It has raised some fun issues.

First off, I needed a way to configure it so they could not in fact set the alarm and lock the door - yes they can get out by other means, but they were rather puzzled the door would not open. Easy enough.

However, the biggest issue I have is the bus is showing a lot of errors. I have retries, and they work, and the door works and the max reader works, but there are errors, several a second.

I have worked out on a bench test that this seems to be a relatively simple matter. With the resistors, the bus comes cleanly back to zero after we transmit, and that causes us to catch a BREAK after we transmit, which we were taking as the start of a response message. A simple bit of code to ignore that and it looks like they will no longer be a problem. So that is one mystery solved.

Now I have a scope I can also see that we are nowhere near seeing nasty bus reflections or ringing to get in the way of things working without resistors. They are a good idea, yes, and will help in some noisy environments or long lines I am sure, but at 9600 they are probably not strictly necessary. In some ways the flaw in the design is the long (10ms) bus idle periods. A protocol with message lengths and overlapping bus driving turn around could have eliminated the bus ever being idle and made the whole thing a lot cleaner.

So lack of resistors does not explain all the errors on the bus.

So, time to play with an oscilloscope on that bus... This looks wrong! 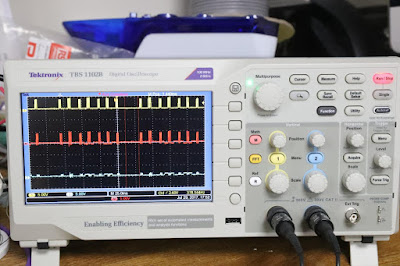 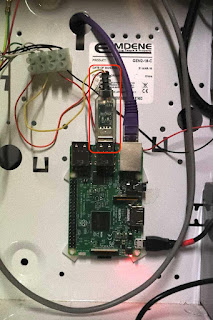 As you can see, we only have one side. It looks a lot like this bugger is broken... The RS485 driver. This is the second one I have seen like this, the first was when I first was started the project and I wasted hours trying to find why I could not transmit. It seems only one side of the bus is driving!

I'll get another and I bet all of the errors go away. To be honest it is a miracle that the bus works at all with only one leg. Somehow it limps along and the devices cope.

It has, however, been a good test of the logging and fault reporting which clearly shows the bus errors and retries.

In the mean time, it is quite amusing watching a neighbours RF PIR tripping as they move about!