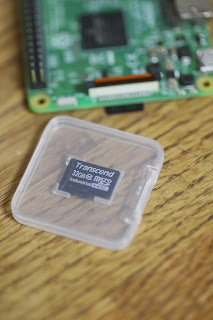 If you want to install a Raspberry Pi for some purpose, you will end up putting an image on an SD card and installing in the Pi. You can get pre-loaded SD cards even.

You can get industrial SD cards! These have more write cycles, wide temperature range, and even have S.M.A.R.T. They are more expensive. The one thing I hear all the time with anyone using Pis is that the SD cards die. There are many good ways to reduce this - turn off some logging, log to a RAM disk, remote logging, not ever running mysql on it, and so on. But a good SD card is also a good start and I think probably worth it.

So you download an image, the stretch lite is a start. I renamed to pi.img for the following examples.

Now, you install it on a memory card. The instructions for Mac are simple, and involve using a dd command. Important, on a Mac, is use the /dev/rdiskN not /dev/diskN as it is massively faster (character and block device versions of the raw disk access). You have to eject/unmount it before you can do the dd, and once you have finished...

You end up with a bootable Debian image on you Pi. Yay!

There are ways to make a customer image, e.g. www.pibakery.org which allow you to make the image you want to start with, but there may be further tweaks you want to the image itself, and the following shows a way to do that.

You cannot ssh to it!

This is a pain, you have to find a monitor, HDMI cable, keyboard, and faff about. I want an image I can ssh to. I understand why it is not the default, but if you are making something headless you need to be able to ssh to it.

The trick here is changing the image. However, as this is a complete "disk" image with partition table and boot and main partitions, you cannot simply mount it, you have to mount part of it.

First off, find the partitions. There are normally two - a boot and a linux partition.

And then you can mount...

Then all you have to do is create a file called ssh in the boot partition.

Now you have an image that will boot and allow ssh, yah...

I also wanted to change the default password, add ssh keys, update the Debian install, and pre-install a few things. Now, you can do this on a Pi, i.e. install the image, ssh in, and do stuff, but then how do you make an image of that to put on the next Pi? Well, you could image your SD, but that can be 8G, 16G or 32G or whatever, and also ends up not working on another SD some of the time. What I wanted was a clean (small) image that I could install on an SD with some pre-installed stuff.

The trick is very much as above, mount the image, but to do anything you have to be running on a Pi, so I ended up with a running Pi, and loading the image on to that Pi itself, and then on the Pi I mounted the image. Yes, Russian dolls come to mind.

This time we just need the start of the linux partition.

And then you mount.

Then you chroot in to it

At this point you are running in a new root file system. You can run commands like passwd, and
apt-get and so on as normal. When you have finished, simply exit the chroot and unmount...

And now you have an image that has stuff pre-installed, with the right password or ssh keys as you have installed, all ready to go.
at January 05, 2018