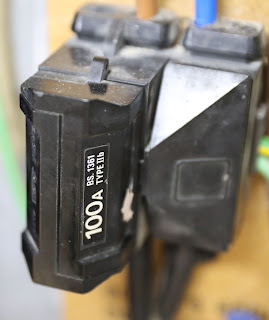 Stage 3: We checked the fuse, and it is marked 100A on the carrier, but is in fact only 60A. Wow, we are way closer to hitting that than we realised. So we need that upgraded. That cannot happen until the tails are upgraded, and they checked the meter is 100A, which it is. So we are good to go for 100A installation...
at February 15, 2018